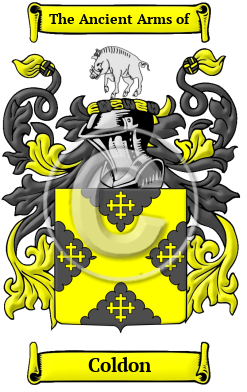 The ancestors of the Coldon surname lived among the ancient Anglo-Saxon culture. The name comes from when they lived in Colton. There are places named Colton in Staffordshire, Norfolk and North Yokshire. Although the Staffordshire origin is more common some families' names are derived from the Norfolk location.

Early Origins of the Coldon family

The surname Coldon was first found in Colton or Coulton, located in Staffordshire, North Yorkshire, Norfolk and Cumbria. The places had a variety of listings in the Domesday Book including Coletuna [1], Coletune (North Yorkshire) and Coltone (Staffordshire.) However, the meaning of the place names were essentially the same: "farmstead of a man called Cola or Koli" having derived from the Old English or Old Scandinavian personal name + tun. [2] The Cumbria placename was originally listed as Coleton in 1202, but its origins may have been much earlier.

Early History of the Coldon family

This web page shows only a small excerpt of our Coldon research. Another 116 words (8 lines of text) covering the years 1126, 1371, 1235, 1296, 1320 and 1404 are included under the topic Early Coldon History in all our PDF Extended History products and printed products wherever possible.

Before English spelling was standardized a few hundred years ago, spelling variations of names were a common occurrence. Elements of Latin, French and other languages became incorporated into English through the Middle Ages, and name spellings changed even among the literate. The variations of the surname Coldon include Colton, Coulton and others.

Another 39 words (3 lines of text) are included under the topic Early Coldon Notables in all our PDF Extended History products and printed products wherever possible.

Migration of the Coldon family to Ireland

Some of the Coldon family moved to Ireland, but this topic is not covered in this excerpt.
Another 30 words (2 lines of text) about their life in Ireland is included in all our PDF Extended History products and printed products wherever possible.

Coldon migration to the United States +

Coldon Settlers in United States in the 19th Century