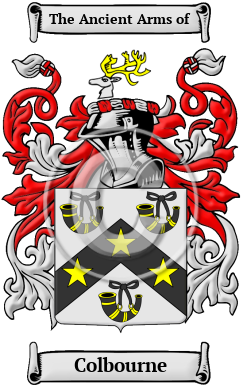 The Colbourne name has descended through the generations from the ancient Anglo-Saxon culture. Their name comes from having lived in Colbourne, a township in the parish of Catterick in the North Riding of Yorkshire. [1] It is from the place-name that the family name is derived. [2] [3]

Early Origins of the Colbourne family

The surname Colbourne was first found in Yorkshire where one of the first of the name on record was Geoffrey de Colebrunn in 1208 who held estates in the North Riding of Yorkshire in the parish of Catterick. Later, William de Colburn was listed as a Freeman of York in 1386. [6]

Early History of the Colbourne family

Notables of the family at this time include Prisca Coborn (1622-1701) an English wealthy widow of a brewer, who established the Coopers' Company and Coborn School, a coeducational school in Bow in 1701. Sir John Colborne, first Baron Seaton (1778-1863), general, only son of Samuel Colborne of Lyndhurst, Hampshire, was born there on 16 Feb. 1778. He entered the army as an ensign in the 20th regiment on 10 July 1794, and won every step of promotion without purchase. He was promoted lieutenant on 4 Sept. 1795, and captain-lieutenant on 11 Aug...
Another 90 words (6 lines of text) are included under the topic Early Colbourne Notables in all our PDF Extended History products and printed products wherever possible.

In Newfoundland, Canada, the name Colbourne is the 263rd most popular surname with an estimated 170 people with that name. [9]

Colbourne migration to the United States +

To escape the unstable social climate in England of this time, many families boarded ships for the New World with the hope of finding land, opportunity, and greater religious and political freedom. Although the voyages were expensive, crowded, and difficult, those families that arrived often found greater opportunities and freedoms than they could have experienced at home. Many of those families went on to make significant contributions to the rapidly developing colonies in which they settled. Early North American records indicate many people bearing the name Colbourne were among those contributors:

Colbourne Settlers in United States in the 20th Century

Colbourne Settlers in Canada in the 20th Century

Colbourne Settlers in Australia in the 19th Century

Colbourne Settlers in New Zealand in the 19th Century

Historic Events for the Colbourne family +