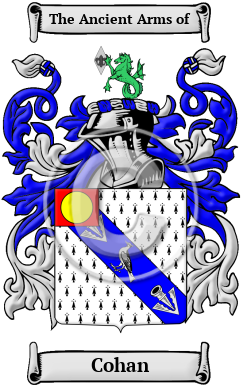 Irish names tend to vary widely in their spelling and overall form. The original Gaelic form of the name Cohan is "O Cadhain," from the word "cadhan," which means wild goose. Kilcoyne, commonly seen as an alias of Coyne, is a patronymic name derived from the Gaelic name Mac Giolla Chaoine, denoting the son of a devotee of St. Caoin. Coen is also often the Anglicized version of the Gaelic name "O Comhdhain."

Early Origins of the Cohan family

The surname Cohan was first found in Connacht (Irish: Connachta, (land of the) descendants of Conn), and Leinster. The name became confused with Coen, Kyne, and Kilcoyne, all of which have derived from it, or have been the origin of Coyne. The ancient Coens, descended from the Gaelic Caomhan, the Chief of his clann in 876 A.D. who was descended from the Princes of Hy Fiachra, and the great General King Niall of the Nine Hostages.

Early History of the Cohan family

This web page shows only a small excerpt of our Cohan research. Another 90 words (6 lines of text) covering the years 1803, 1839, 1868, and 1891 are included under the topic Early Cohan History in all our PDF Extended History products and printed products wherever possible.

Just like the English language, the Gaelic language of Ireland was not standardized in the Middle Ages. Therefore, one's name was often recorded under several different spellings during the life of its bearer. Spelling variations revealed in the search for the origins of the Cohan family name include Coyne, Coen, Cohen, Kyne, Kilcoyne, Coyney, Koyne, Koen, Kohen, M'Coyne, Coyn, Coin, Coine, Koin, Koine, Barnacle (a synonym of Coyne by translation), Barnicle, Barnycle, Barnackle, Barnicall, Barnickle and many more.

Another 33 words (2 lines of text) are included under the topic Early Cohan Notables in all our PDF Extended History products and printed products wherever possible.

In the United States, the name Cohan is the 10,522nd most popular surname with an estimated 2,487 people with that name. [1]

Cohan migration to the United States +

Ireland became inhospitable for many native Irish families in the 19th centuries. Poverty, lack of opportunities, high rents, and discrimination forced thousands to leave the island for North America. The largest exodus of Irish settlers occurred with the Great Potato Famine of the late 1840s. For these immigrants the journey to British North America and the United States was long and dangerous and many did not live to see the shores of those new lands. Those who did make it were essential to the development of what would become two of the wealthiest and most powerful nations of the world. These Irish immigrants were not only important for peopling the new settlements and cities, they also provided the manpower needed for the many industrial and agricultural projects so essential to these growing nations. Immigration and passenger lists have documented the arrival of various people bearing the name Cohan to North America:

Cohan Settlers in United States in the 18th Century

Cohan Settlers in United States in the 19th Century

Cohan Settlers in New Zealand in the 19th Century