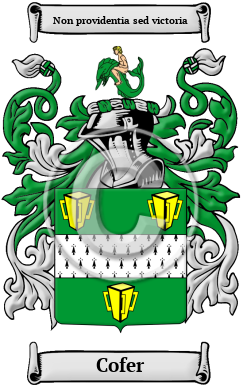 Early Origins of the Cofer family

The surname Cofer was first found in County Cork, Roscommon and Meath, where the claim descent from the Irish monarch, Luy Mac Con, from the line of Ithe Kings, ancestor of Cobthach Fion, who in turn was the ancestor of the name Coffey or Caughey (both pronounced the same way). The O'Coffeys of Corcaloidhe are kin of the O'Driscolls, and are still common in southwest County Cork today.

Early History of the Cofer family

Many different spelling variations of the surname Cofer were found in the archives researched. These included Scribes and church officials generally spelled a name as it sounded; as a result, a person's name could be spelt innumerable ways in his lifetime. Coffey, Caughey, Coffie, Coughey, Cauffey, Cauffy, Cauffie, Coffy, Coughay, Coffay, Coffeye and many more.

Notable among the family name at this time was Dermot O'Coffey (fl. 1580), the Gaelic poet. Charles Coffey of Leinster (1700-1745), was an Irish dramatist, actor and composer, a 'native of Ireland,' is first heard of in Dublin. In Dublin...
Another 39 words (3 lines of text) are included under the topic Early Cofer Notables in all our PDF Extended History products and printed products wherever possible.

In the United States, the name Cofer is the 5,677th most popular surname with an estimated 4,974 people with that name. [2]

Cofer migration to the United States +

The 19th century brought a massive reduction in Ireland's population. It seemed that during the Great Potato Famine of the late 1840s the Irish people had two options: starve or immigrate. Those that chose the later frequently headed for the United States, hopeful for land, work, and equality. Those determined for free land joined the migration west; while others stayed behind to live in urban centers and often work in factories. Still others began a transitory life in work camps, building the bridges, canals, railways, and highways so critical to the rapidly development of the growing industrial nation. Early passenger and immigration lists have shown many early immigrants bearing the name Cofer:

Cofer Settlers in United States in the 20th Century