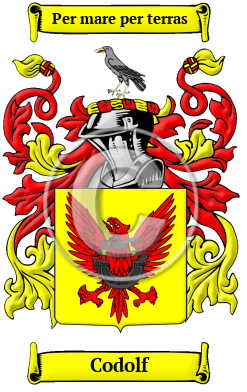 Codolf is a name that dates back to the kingdom of Dalriada in ancient Scotland. It was given to someone who lived in Cullen in the Hebrides.

Early Origins of the Codolf family

The surname Codolf was first found in Cullen, a burgh, seaport, and parish, in the county of Banff. "This place, the origin of the name of which is altogether uncertain, was originally called Inverculan, being bounded on the north and west by the water of Cullen, which falls into the sea on the western side of the parish; and in ancient times it formed part of the parish of Fordyce. Its early history is for the most part involved in obscurity; but there appears to be no reason to doubt the truth of the tradition, that a severe conflict took place here between the Danes and the Scots under Indulfus, in the year 960. The king was killed by an arrow at the head of his troops; but the enemy were completely routed." [1]

Early History of the Codolf family

This web page shows only a small excerpt of our Codolf research. Another 133 words (10 lines of text) covering the years 1424, 1435 and are included under the topic Early Codolf History in all our PDF Extended History products and printed products wherever possible.

Spelling in the medieval era was a highly imprecise process. Translation, particularly from Gaelic to English, was little better. For these reasons, early Scottish names are rife with spelling variations. In various documents Codolf has been spelled Cull, Coll, Coole, Cula, Codolf and others.

More information is included under the topic Early Codolf Notables in all our PDF Extended History products and printed products wherever possible.

Migration of the Codolf family to Ireland

Some of the Codolf family moved to Ireland, but this topic is not covered in this excerpt.
Another 50 words (4 lines of text) about their life in Ireland is included in all our PDF Extended History products and printed products wherever possible.

Migration of the Codolf family

Many of the ancestors of Dalriadan families who arrived in North America still live in communities along the east coast of Canada and the United States. In the American War of Independence many of the original settlers traveled north to Canada as United Empire Loyalists. In the late 19th and early 20th centuries the ancestors of many Scots began recovering their collective national heritage through Clan societies, highland games, and other patriotic events. Research into the origins of individual families in North America revealed records of the immigration of a number of people bearing the name Codolf or a variant listed above: Passenger lists show the &quot.