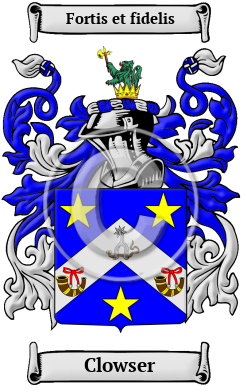 Clowser is a name of ancient Anglo-Saxon origin and comes from the family once having lived as inhabitants by the enclosed place. Another origin may be derived from the Old English word close, that referred to worker in the farm-yard.

Early Origins of the Clowser family

The surname Clowser was first found in Yorkshire where the Yorkshire Poll Tax Rolls of 1379 make the first mention of the family. There we found Johannes del Clos and Willelmus del Clos both listed as holding lands at that time. [1]

However one notes source states: "some families of this name are of Yorkshire origin and some are Gaelic-Ó Cluasaigh; both are found in Antrim and adjacent counties." [2]

Early History of the Clowser family

Sound was what guided spelling in the essentially pre-literate Middle Ages, so one person's name was often recorded under several variations during a single lifetime. Also, before the advent of the printing press and the first dictionaries, the English language was not standardized. Therefore, spelling variations were common, even among the names of the most literate people. Known variations of the Clowser family name include Close, Cloase, Cloise, Clowse, Clovse, Cloace, Cloce, Cloose and many more.

Notables of the family at this time include Nicholas Close (died 1452), English priest, Bishop of Carlisle (1450 to 1452) and Bishop of Coventry and Lichfield (1452 to 1453). He was "one of the six original fellows of King's College, Cambridge, appointed by the founder, Henry VI, in 1443. Of his previous life nothing has as yet been discovered. The accounts of King's College show that he was frequently employed on important business, and in 1447 he became overseer of the building works ('magister operum')...
Another 84 words (6 lines of text) are included under the topic Early Clowser Notables in all our PDF Extended History products and printed products wherever possible.

Migration of the Clowser family to Ireland

Some of the Clowser family moved to Ireland, but this topic is not covered in this excerpt.
Another 180 words (13 lines of text) about their life in Ireland is included in all our PDF Extended History products and printed products wherever possible.

Clowser migration to the United States +

For political, religious, and economic reasons, thousands of English families boarded ships for Ireland, Canada, the America colonies, and many of smaller tropical colonies in the hope of finding better lives abroad. Although the passage on the cramped, dank ships caused many to arrive in the New World diseased and starving, those families that survived the trip often went on to make valuable contributions to those new societies to which they arrived. Early immigrants bearing the Clowser surname or a spelling variation of the name include:

Clowser Settlers in United States in the 18th Century