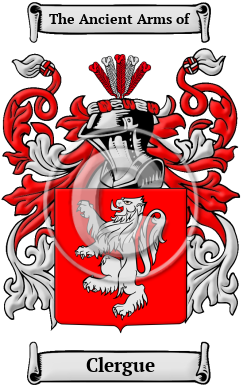 The French name Clergue comes from "le clerc", or "the clerk", and as such was an occupational name originally used for a scribe or secretary.

Early Origins of the Clergue family

The surname Clergue was first found in Limousin, where this renowned family held a family seat from ancient times.

Many members of this important family were recorded as participants in the French Revolution and in its resultant political forums. Théodore François Joseph Leclaire was a member of the military who was promoted to the rank of Chief of Battalion of the 98th regiment in 1791, followed in 1793 by a promotion to Commander of Arms. He was also honoured by being admitted to the Legion of Honour.

Early History of the Clergue family

French surnames were subject to numerous spelling alterations depending on the region and time it was used. The early development of the French language relied heavily on borrowing elements and grammar from other languages. For example, Old French was infused with Germanic words and sounds when barbarian tribes invaded and settled in France after the fall of the Roman Empire. Middle French also borrowed heavily from the Italian language during the Renaissance. As a result of these linguistic and cultural influences, the name Clergue is distinguished by a number of regional variations. The many spelling variations of the name include Leclair, Leclaire, Leclaires, Leclère, Leclere, Leclères, Lecleres, Leclert, Lecler, le Clair, le Claire, le Claires, le Clère, le Clere, le Clères, le Clert, le Cler, Clair, Claire, Claires, Clère, Clere, Clères, Clert and many more.

Notable amongst the family was Jean Leclerc (c.1587-1633), French painter and etcher, born into the service of Duke Charles III of Lorraine; Michel Le Clerc (1622-1691), a French lawyer and dramatist; Sébastien Leclerc (1637-1714), a French printmaker, draughtsman...
Another 37 words (3 lines of text) are included under the topic Early Clergue Notables in all our PDF Extended History products and printed products wherever possible.

Migration of the Clergue family

In 1643, 109 years after the first landings by Cartier, there were only about 300 people in Quebec. Migration was slow. The fur trade attracted migrants, both noble and commoner. By 1675, there were 7000 French in Quebec. By the same year the French Acadian presence in the Maritimes had reached 500. The French founded Lower Canada, thus becoming one of the two great founding nations of Canada. The family name Clergue has made many distinguished contributions in France and New France to the world of science, culture, religion, and education. Amongst the settlers in North America with this distinguished name Clergue were Elizabeth Leclair, who settled in Carolina in 1695; Joseph and Marguerite Leclair, who landed at l'Isle-St-Jean, in Acadia, (Prince Edward Island) about 1724.