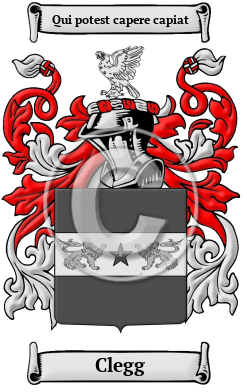 The Clegg name has descended through the generations from the ancient Anglo-Saxon culture. Their name comes from having lived in the region of Clegg in Rochdale in the county of Lancashire. In some cases, this name was derived from the Gaelic MacLiagh, meaning "son of the physician." One source claims that the name was "Old Norse, kleggi, a compact mass. There was a Northman with this surname in the Landnamabok." [1]

Early Origins of the Clegg family

The surname Clegg was first found in Lancashire where "almost all our Cleggs hail from Clegg, or Clegg Hall, in the parish of Rochdale." [2] "Clegg was the name of a very ancient family of Clegg Hall near Rochdale; but the estate passed out of the family by marriage in the reign of Edward VI. The name is common in the Rochdale registers of the 16th century, and it is still in the town." [3]

Early History of the Clegg family

Only recently has spelling become standardized in the English language. As the English language evolved in the Middle Ages, the spelling of names changed also. The name Clegg has undergone many spelling variations, including Clegg, Clegge, Cleg, Claig, Claigg, Claige, Cleig, Cleigg, Clegges, Clegs, Cllege, Cleagg, Cleagge and many more.

Distinguished members of the family include James Clegg, M.D. (1679-1755), a Presbyterian minister and author from Rochdale, Lancashire. "He was educated by the Rev. Richard Frankland at...
Another 27 words (2 lines of text) are included under the topic Early Clegg Notables in all our PDF Extended History products and printed products wherever possible.

Migration of the Clegg family to Ireland

Some of the Clegg family moved to Ireland, but this topic is not covered in this excerpt.
Another 279 words (20 lines of text) about their life in Ireland is included in all our PDF Extended History products and printed products wherever possible.

Clegg migration to the United States +

To escape the unstable social climate in England of this time, many families boarded ships for the New World with the hope of finding land, opportunity, and greater religious and political freedom. Although the voyages were expensive, crowded, and difficult, those families that arrived often found greater opportunities and freedoms than they could have experienced at home. Many of those families went on to make significant contributions to the rapidly developing colonies in which they settled. Early North American records indicate many people bearing the name Clegg were among those contributors:

Clegg Settlers in United States in the 17th Century

Clegg Settlers in United States in the 18th Century

Clegg Settlers in United States in the 19th Century

Clegg Settlers in Canada in the 19th Century

Clegg Settlers in Australia in the 19th Century

Clegg Settlers in New Zealand in the 19th Century

Historic Events for the Clegg family +

Suggested Readings for the name Clegg +