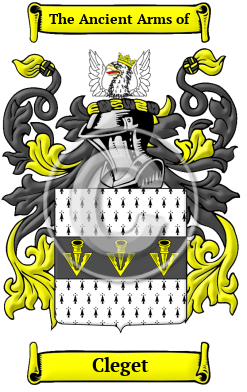 The Cleget name has descended through the generations from the ancient Anglo-Saxon culture. Their name comes from having lived in the village of Clegett or Clegett Hall, in the parish of Rochdale, Kent. The surname is derived from the Old Norse word which means a haystack-shaped hill. The surname also has an occupational origin, which means that it is derived form the trade or profession of the original bearer. The name was also given to those who worked as bellringers.

Cleygate, a manor, in the parish of ThamesDitton, Second division of the hundred of Kingston, union of Kingston, in the East division of Surrey may be a point of origin for the family. [1] "It was given to the convent of Westminster by Tosti, probably the son of Earl Godwin, and the grant was confirmed by Edward the Confessor. The Domesday Survey records that "Claigate" was then still held by the monks, and the lands continued in their possession until the Dissolution. " [2]

Early Origins of the Cleget family

The surname Cleget was first found in Kent, at Claygate Cross, a hamlet in the Sevenoaks District. Alternatively, the name could have been derived from Claygate, a village in Surrey that dates back to the Domesday Book of 1086 where it was first listed as Claigate, a manor of the village Thames Ditton. [3] The main manor of the village was held by Westminster Abbey.

This is indeed a rare name as most of the records are quite late in the 17th and 18th centuries - little was found earlier.

Early History of the Cleget family

Distinguished members of the family include Nicholas Clagett the Elder (1610?-1663), English Puritan divine, born at Canterbury about 1610 and in 1628 was entered as a student of Merton College, Oxford, where he proceeded B.A. in October 1681. "Afterwards he migrated to Magdalen Hall, and commenced M.A. in June 1634, being then generally esteemed a very able moderator in philosophy (ib. i. 474). About 1636 he became vicar of Melbourne, Derbyshire, and about 1644 he was chosen lecturer or preacher at St. Mary's Church, Bury St. Edmunds, Suffolk." [4] His son, Nicholas Clagett the Younger (1654-1727), was an English controversialist. "He was...
Another 115 words (8 lines of text) are included under the topic Early Cleget Notables in all our PDF Extended History products and printed products wherever possible.

Migration of the Cleget family

To escape the unstable social climate in England of this time, many families boarded ships for the New World with the hope of finding land, opportunity, and greater religious and political freedom. Although the voyages were expensive, crowded, and difficult, those families that arrived often found greater opportunities and freedoms than they could have experienced at home. Many of those families went on to make significant contributions to the rapidly developing colonies in which they settled. Early North American records indicate many people bearing the name Cleget were among those contributors: Thomas Clagett who arrived in Maryland in 1670 and Thomas John Clagett in Maryland in 1767.