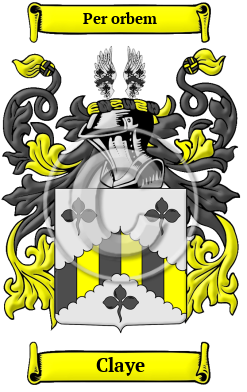 The name Claye was brought to England by the Normans when they conquered the country in 1066. The ancestors of the Claye family lived in Lincolnshire, where they held a family seat at Claye. The place name literally means "dweller at the clayey place." [1]

Early Origins of the Claye family

The surname Claye was first found in Lincolnshire where the Hundredorum Rolls of 1273 list William del Cley and Robert del Clay as holding lands there at that time. The same rolls also listed Alicia in le Clay, Huntingdonshire. [2]

"Clay has long been a Nottinghamshire surname. It was represented in the parish of Hayton in the time of Henry VII. Hercules Clay was a mayor of Newark in the reign of Charles I. (S.), and Clay is still a Newark name. The Clays of Southwell during last century carried their pedigree back 200 years, and their name is yet in the town. Six centuries ago Clay was a common name in the east of England, especially in Essex, Lincolnshire, Hunts, Cambridgeshire, and Beds. It is still well established in Lincolnshire, as well as in Nottinghamshire and Derbyshire." [3]

Early History of the Claye family

This web page shows only a small excerpt of our Claye research. Another 78 words (6 lines of text) covering the years 1086, 1457, 1537, 1840, 1642 and 1646 are included under the topic Early Claye History in all our PDF Extended History products and printed products wherever possible.

The English language only became standardized in the last few centuries. For that reason, spelling variations are common among many Anglo-Norman names. The shape of the English language was frequently changed with the introduction of elements of Norman French, Latin, and other European languages; even the spelling of literate people's names were subsequently modified. Claye has been recorded under many different variations, including Clay, Claye, Cley, Cleye, McClay and others.

Outstanding amongst the family at this time was John Claymond (1457?-1537), English divine and scholar, "the son of John Claymond and Alice his wife, 'sufficient inhabitants' of Frampton in Lincolnshire, where John was born." [4] Frederic Clay, son of James Clay, M.P. for Hull was born Aug. 3, 1840, in the Rue Chaillot, Paris. He was educated in music entirely by Molique, with the exception...
Another 63 words (4 lines of text) are included under the topic Early Claye Notables in all our PDF Extended History products and printed products wherever possible.

Migration of the Claye family to Ireland

Some of the Claye family moved to Ireland, but this topic is not covered in this excerpt.
Another 69 words (5 lines of text) about their life in Ireland is included in all our PDF Extended History products and printed products wherever possible.

Claye migration to the United States +

To escape the uncertainty of the political and religious uncertainty found in England, many English families boarded ships at great expense to sail for the colonies held by Britain. The passages were expensive, though, and the boats were unsafe, overcrowded, and ridden with disease. Those who were hardy and lucky enough to make the passage intact were rewarded with land, opportunity, and social environment less prone to religious and political persecution. Many of these families went on to be important contributors to the young nations of Canada and the United States where they settled. Clayes were some of the first of the immigrants to arrive in North America:

Claye Settlers in United States in the 17th Century

Motto: Per orbem
Motto Translation: Through the world.