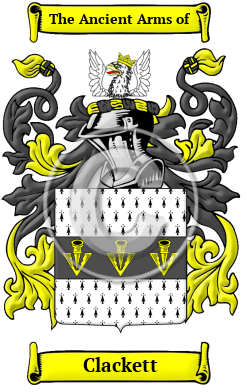 The name Clackett has a long Anglo-Saxon heritage. The name comes from when a family lived in the village of Clegett or Clegett Hall, in the parish of Rochdale, Kent. The surname is derived from the Old Norse word which means a haystack-shaped hill. The surname also has an occupational origin, which means that it is derived form the trade or profession of the original bearer. The name was also given to those who worked as bellringers.

Cleygate, a manor, in the parish of ThamesDitton, Second division of the hundred of Kingston, union of Kingston, in the East division of Surrey may be a point of origin for the family. [1] "It was given to the convent of Westminster by Tosti, probably the son of Earl Godwin, and the grant was confirmed by Edward the Confessor. The Domesday Survey records that "Claigate" was then still held by the monks, and the lands continued in their possession until the Dissolution. " [2]

Early Origins of the Clackett family

The surname Clackett was first found in Kent, at Claygate Cross, a hamlet in the Sevenoaks District. Alternatively, the name could have been derived from Claygate, a village in Surrey that dates back to the Domesday Book of 1086 where it was first listed as Claigate, a manor of the village Thames Ditton. [3] The main manor of the village was held by Westminster Abbey.

This is indeed a rare name as most of the records are quite late in the 17th and 18th centuries - little was found earlier.

Early History of the Clackett family

Spelling variations in names were a common occurrence before English spelling was standardized a few hundred years ago. In the Middle Ages, even the literate spelled their names differently as the English language incorporated elements of French, Latin, and other European languages. Many variations of the name Clackett have been found, including Clagett, Claggitt, Clegget, Cleggett, Cleygate, Claygate, Clackett, Claigate, Cleget, Claggett, Claggot and many more.

Distinguished members of the family include Nicholas Clagett the Elder (1610?-1663), English Puritan divine, born at Canterbury about 1610 and in 1628 was entered as a student of Merton College, Oxford, where he proceeded B.A. in October 1681. "Afterwards he migrated to Magdalen Hall, and commenced M.A. in June 1634, being then generally esteemed a very able moderator in philosophy (ib. i. 474). About 1636 he became vicar of Melbourne, Derbyshire, and about 1644 he was chosen lecturer or preacher at St. Mary's Church, Bury St. Edmunds, Suffolk." [4] His son, Nicholas Clagett the Younger (1654-1727), was an English controversialist. "He was...
Another 115 words (8 lines of text) are included under the topic Early Clackett Notables in all our PDF Extended History products and printed products wherever possible.

Clackett migration to the United States +

Families began migrating abroad in enormous numbers because of the political and religious discontent in England. Often faced with persecution and starvation in England, the possibilities of the New World attracted many English people. Although the ocean trips took many lives, those who did get to North America were instrumental in building the necessary groundwork for what would become for new powerful nations. Some of the first immigrants to cross the Atlantic and come to North America bore the name Clackett, or a variant listed above:

Clackett Settlers in United States in the 17th Century