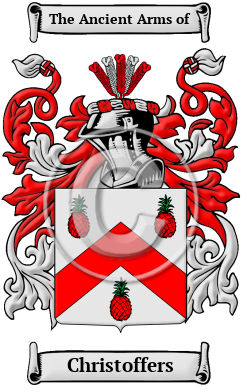 The name Christoffers was spawned by the ancient Anglo-Saxon culture that ruled a majority of Britain. It comes from Christopher, an ancient and popular personal name which has been popular for many years as literally, the name means 'Bearer of Christ'.

"I have been told that all who bear the somewhat rare name of Christopherson hail from Furness, in North Lancashire. Anyway it is a native, and owes its origin to the treacherous sands of Morecombe and Duddon. The legend of St. Christopher is that he found an occupation in guiding passengers across a wide stream. One night he bare unawares the child Christ, and was about to sink under an ever-increasing weight, when the Saviour said, 'Thou bearest Him who beareth the sins of the world.' No doubt there would be a shrine to the Saint for belated travellers on Chapel Isle, opposite Conishead Priory. Many a babe would be dedicated to him in gratitude for some hairbreadth escape his father had experienced. " [1]

Early Origins of the Christoffers family

The surname Christoffers was first found in North Lancashire at Furness (now known as Dalton-In-Furness. "The town derived its principal importance from the erection of the magnificent Abbey of Furness, founded in 1127, by Stephen, afterwards king of England, for monks of the Cistercian order, whom he removed from Tulketh, in Amounderness, to this valley, where, obtaining valuable grants, they continued for more than four centuries. " [2]

Early History of the Christoffers family

This web page shows only a small excerpt of our Christoffers research. Another 69 words (5 lines of text) covering the years 1558, 1613, 1225, 1245, 1295 and 1659 are included under the topic Early Christoffers History in all our PDF Extended History products and printed products wherever possible.

Christoffers has been spelled many different ways. Before English spelling became standardized over the last few hundred years, spelling variations in names were a common occurrence. As the English language changed in the Middle Ages, absorbing pieces of Latin and French, as well as other languages, the spelling of people's names also changed considerably, even over a single lifetime. Many variations of the name Christoffers have been found, including Christopher, Cristopher and others.

Distinguished members of the family include John Christopherson (d. 1558), Bishop of Chichester, "a native of Ulverstone in Lancashire, and was educated in the university of Cambridge, first at Pembroke...
Another 30 words (2 lines of text) are included under the topic Early Christoffers Notables in all our PDF Extended History products and printed products wherever possible.

Migration of the Christoffers family to Ireland

Some of the Christoffers family moved to Ireland, but this topic is not covered in this excerpt.
Another 57 words (4 lines of text) about their life in Ireland is included in all our PDF Extended History products and printed products wherever possible.

Migration of the Christoffers family

In an attempt to escape the chaos experienced in England, many English families boarded overcrowded and diseased ships sailing for the shores of North America and other British colonies. Those families hardy enough, and lucky enough, to make the passage intact were rewarded with land and a social environment less prone to religious and political persecution. Many of these families became important contributors to the young colonies in which they settled. Early immigration and passenger lists have documented some of the first Christofferss to arrive on North American shores: Christopher Christopher, Geoffrey's brother, who settled in Nantucket in 1630; William and Katherine Christopher who arrived in Barbados in 1679 with their servants.