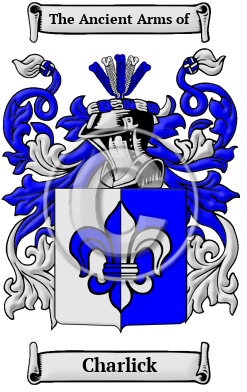 When the Strongbownian's arrived in Ireland there was already a system for creating patronymic names in place. Therefore, the native population regarded many of the Anglo-Norman naming practices that these settlers were accustomed to as rather unusual. Despite their differences, the two different systems eventually merged together rather insidiously. The Strongbownians, when they arrived, displayed a preference for used nickname surnames. Two of the most prevalent forms were oath nicknames and imperative names. Oath names often carried blessings or were formed from habitual expressions. Imperative names, formed from a verb added to a noun or an adverb, metaphorically described the bearer's occupations. The nick name surname Charlick is derived from a nickname for a short-haired person. However, at least one expert holds the alternative theory that the surname Charlick denotes a fair-haired person. According to this theory, the name is derived from the words "scir," which means "bright," and "locc," which means "hair." The Gaelic form of the name Charlick is Scurlóg.

Early Origins of the Charlick family

The surname Charlick was first found in Cheshire, where they held a family seat from early times and their first records appeared on the early census rolls taken by the early Kings of Britain to determine the rate of taxation of their subjects.

Early History of the Charlick family

Church officials and medieval scribes spelled names as they sounded; therefore, single person, could have his name spelt many different ways during their lifetime. While investigating the origins of the name Charlick, many spelling variations were encountered, including: Sherlock, Scurlock, Scurlog, Shylock, Shyrlock, Sherlocke, Cherlock, Sharlock, Sharloch, Sherloch, Shyrloch, Charlock, Charloch, Sharlocke, Sharloche and many more.

Notable amongst the family up to this time was Paul Sherlock (1595-1646), an Irish Jesuit, born at or near Waterford; Richard Sherlock (1612-1689), an English divine, born at Oxton, a township in the Cheshire peninsula of Wirral...
Another 37 words (3 lines of text) are included under the topic Early Charlick Notables in all our PDF Extended History products and printed products wherever possible.

Charlick Settlers in Australia in the 19th Century