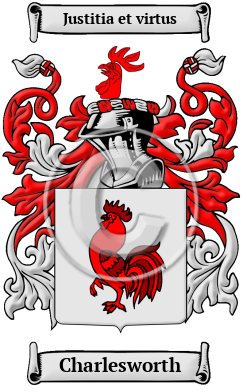 The Anglo-Saxon name Charlesworth comes from when the family resided at Charlesworth, a village in the county of Derbyshire located near Chapellon, on the boarder of Yorkshire. The surname literally means of Charlesworth, which was customary of surnames in medieval England to add one's personal name to the name of the area of residence. The suffix worth is also very common as it denotes that the individuals lived at an enclosure or a homestead.

Early Origins of the Charlesworth family

The surname Charlesworth was first found in Derbyshire where they held a family seat from very ancient times, some say well before the Norman Conquest and the arrival of Duke William at Hastings in 1066 A.D.

Early History of the Charlesworth family

This web page shows only a small excerpt of our Charlesworth research. Another 76 words (5 lines of text) are included under the topic Early Charlesworth History in all our PDF Extended History products and printed products wherever possible.

More information is included under the topic Early Charlesworth Notables in all our PDF Extended History products and printed products wherever possible.

In the United States, the name Charlesworth is the 18,295th most popular surname with an estimated 2,487 people with that name. [1]

Charlesworth migration to the United States +

Charlesworth Settlers in United States in the 17th Century

Charlesworth Settlers in United States in the 19th Century

Charlesworth Settlers in Australia in the 19th Century

Charlesworth Settlers in New Zealand in the 19th Century