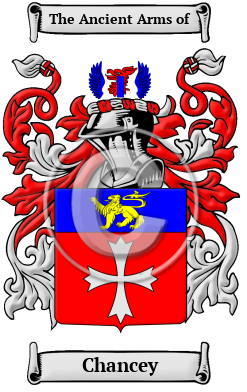 The vast movement of people that followed the Norman Conquest of England of 1066 brought the Chancey family name to the British Isles. They lived in Cauncy, near Amiens, in northern France. The Sieur de Cauncy came from here. "His descendant Sir Henry Chauncy gained distinction as the historian of Hertfordshire. Many of the name and family are settled in that county." [1]

Early Origins of the Chancey family

The surname Chancey was first found in Essex where Robert and Ralph Chance were listed in the Pipe Rolls of 1209 and later in the Feet of Fines for Essex in 1310. Simon de Chanci was listed in the Assize Rolls for Lincolnshire in 1218 and later, Roger de Chauncy was found in the Pipe Rolls for Yorkshire in 1230. Also in Yorkshire, we found John Chancy listed there 1293-1294. Later, Roger Chansi was listed in Gloucestershire in 1361. [3]

Early History of the Chancey family

A multitude of spelling variations characterize Norman surnames. Many variations occurred because Old and Middle English lacked any definite spelling rules. The introduction of Norman French to England also had a pronounced effect, as did the court languages of Latin and French. Therefore, one person was often referred to by several different spellings in a single lifetime. The various spellings include Chance, Chancey, Chaunceur, Channsy, Channsey, Chauncey, Chancy and many more.

Outstanding amongst the family at this time was Maurice Chauncy (d. 1581), Carthusian monk, whose surname is found under the forms of Chamney, Chawney, Chancy, Channy, Chenye, Chasee, and Chawsey, was the eldest son of John Chauncy, esq., of Ardele, Hertfordshire. [4] and Charles Chauncy (1592-1672), was an English-born, American clergyman and educator from Yardleybury (Ardeley), Hertfordshire who became President of Harvard College in...
Another 64 words (5 lines of text) are included under the topic Early Chancey Notables in all our PDF Extended History products and printed products wherever possible.

In the United States, the name Chancey is the 6,880th most popular surname with an estimated 4,974 people with that name. [5]

Chancey migration to the United States +

Many English families left England, to avoid the chaos of their homeland and migrated to the many British colonies abroad. Although the conditions on the ships were extremely cramped, and some travelers arrived diseased, starving, and destitute, once in the colonies, many of the families prospered and made valuable contributions to the cultures of what would become the United States and Canada. Research into the origins of individual families in North America has revealed records of the immigration of a number of people bearing the name Chancey or a variant listed above:

Chancey Settlers in United States in the 17th Century

Chancey Settlers in United States in the 18th Century

Chancey Settlers in United States in the 19th Century

Chancey Settlers in United States in the 20th Century

Chancey Settlers in Canada in the 18th Century

Chancey Settlers in Canada in the 20th Century