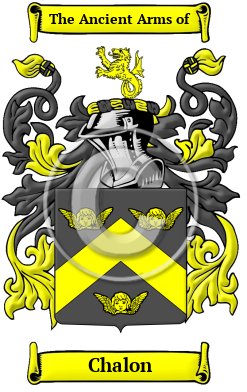 The surname Chalon is derived from the Old English word "chaloun," which means "blanket." This word comes from the place named Châlons-sur-Marne, a prosperous industrial center in Europe, where these items were produced. [1]

The name is thought to have been occupational a chaloner,' a manufacturer or seller of chalons, woollen stuffs, especially coverlets or blankets. [2]

"In his owen chambre he made a bedde with shetes, and with chalons fair yspredde," Chaucer, Reve's Tale.

Early Origins of the Chalon family

The surname Chalon was first found in Powys (Welsh: Powys), a Welsh Kingdom in post-Roman times, now a county of Wales created by joining the former counties of Montgomeryshire, Radnorshire, and Breconshire, where they held a family seat from very ancient times, some say well before the Norman Conquest and the arrival of Duke William at Hastings in 1066 A.D.

By the Hundredorum Rolls of 1273, the name was scattered: Geoffrey le Chaloner, Essex; Thomas le Chalunner, Cambridgeshire; and Nicholas le Chalouner, Derbyshire. The Yorkshire Poll Tax Rolls of 1379 included: Elilabetha Chaloner, 1379; Ricardus Schaloner, coverht-wever; Adam Chalonar, coverlid-uvfer. The last two entries are very interesting, connecting as they do the name with the trade. [2]

Years later in Scotland, Robert Chalonar held a tenement in Linlithow in 1472 and John Chalonare was a witness there in the same year. [3]

Early History of the Chalon family

Although there are not an extremely large number Welsh surnames, there are an inordinately large number of spelling variations of those surnames. This variety of spellings began almost immediately after the acceptance of surnames within Welsh society. As time progressed, these old Brythonic names were eventually were recorded in English. This process was problematic in that many of the highly inflected sounds of the native language of Wales could not be properly captured in English. Some families, however, did decide to modify their own names to indicate a branch loyalty within the family, a religious adherence, or even a patriotic affiliation. The name Chalon has seen various spelling variations: Chaloner, Challener, Challenor, Challinor, Chalener, Chalenor, Challoner, Chalinor, Challon, Challin, Challen, Chalen, Chalin and many more.

Prominent amongst the family during the late Middle Ages was Sir Thomas Chaloner (1521-1565), an English statesman and poet, eldest son of Roger Chaloner, citizen and mercer of London, a member of an old Welsh family; Rev. Edward Chaloner, Chaplain to Charles I; Sir Thomas Chaloner (1559-1615), an English naturalist who introduced alum manufacturing to England; and Thomas Chaloner (1595-1661), an English politician, commissioner at the trial of Charles I and signatory to his death warrant. Richard Challoner (1691-1781), was a Catholic prelate, son of Richard Challoner, a wine cooper at Lewes in Sussex. "Soon afterwards the father died, leaving his young...
Another 294 words (21 lines of text) are included under the topic Early Chalon Notables in all our PDF Extended History products and printed products wherever possible.

Migration of the Chalon family

In the 1800s and 1900s, many Welsh families left for North America, in search of land, work, and freedom. Those who made the trip successfully helped contribute to the growth of industry, commerce, and the cultural heritage of both Canada and the United States. In the immigration and passenger lists were a number of people bearing the name Chalon Robert Challener who settled in Barbados in 1679 with his wife and servants; Thomas Challenor settled in Jamaica in 1684; Alexander Challinor settled in Virginia in 1698.