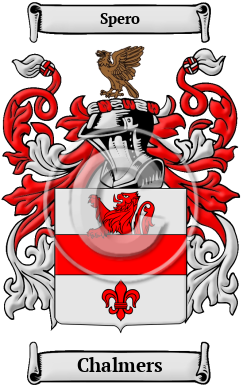 During that dark period of history known as the Middle Ages, the name of Chalmers was first used in France. Many names with Old French origins arrived in Scotland and England in the 11th century with the Norman Conquest. While the patronymic and metronymic surnames, which are derived from the name of the father and mother respectively, are the most common form of a hereditary surname in France, occupational surnames also emerged during the late Middle Ages. Many people, such as the Chalmers family, adopted the name of their occupation as their surname. However, an occupational name did not become a hereditary surname until the office or type of employment became hereditary. The surname Chalmers was an occupational name for a servant in the bedroom of a nobleman. Further research revealed that the name is derived from the Old French word "chambre" which means room, and refers to someone of the title chamberlain, which later came to signify a more administrative office in noble households.

Early Origins of the Chalmers family

The surname Chalmers was first found in Denbighshire (Welsh: Sir Ddinbych), a historic county in Northeast Wales, created by the Laws in Wales Act 1536, where they held lands at Llewenne, granted to John de Chambre from the Earl of Lincoln, who was Constable of Chester. John was a "nobelle Normanne who entred Englaunde in ye traine of King Williaume."

One of the earliest records of the family was on the infamous side. John a Chamber or Chamberlayne (d. 1489), was an English rebel, "a knight of great influence in the north, excited the people to join the rebellion headed by Sir John Egremond in Northumberland and Durham against the heavy subsidy of 1489. Henry, Earl of Northumberland, who had orders to enforce the tax, endeavoured to persuade him to cease his agitation. Chamber would not hear him, and on 20 April the earl was slain by the rebels at Cock Lodge, near Thirsk. Then Thomas, Earl of Surrey, was sent to put down the insurrection. He took Chamber and utterly routed the rebels. Chamber was executed at York. " [1]

Early History of the Chalmers family

Notable among the family at this time was David Chambers, Lord Ormond (1530?-1592), Scottish historian and judge, born in Ross-shire and educated at Aberdeen, where he took orders. Alexander Chalmers (1645-1703) was a Scottish resident of the Polish city of Warsaw, he served as a...
Another 45 words (3 lines of text) are included under the topic Early Chalmers Notables in all our PDF Extended History products and printed products wherever possible.

Migration of the Chalmers family to Ireland

Some of the Chalmers family moved to Ireland, but this topic is not covered in this excerpt.
Another 214 words (15 lines of text) about their life in Ireland is included in all our PDF Extended History products and printed products wherever possible.

Chalmers migration to the United States +

Chalmers Settlers in United States in the 17th Century

Chalmers Settlers in United States in the 18th Century

Chalmers Settlers in United States in the 19th Century

Chalmers Settlers in Canada in the 18th Century

Chalmers Settlers in Canada in the 19th Century

Chalmers Settlers in Australia in the 19th Century

Chalmers Settlers in New Zealand in the 19th Century

Historic Events for the Chalmers family +