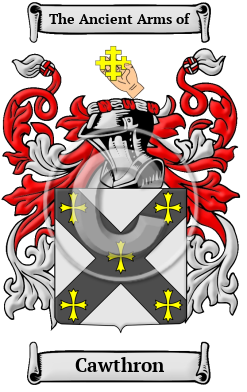 The origins of the Cawthron name lie with England's ancient Anglo-Saxon culture. It comes from when the family lived in Cawthorn, in the North Riding of Yorkshire, or in Cawthorne, in the West Riding. While the names are superficially similar,their origins are different.

The village of Cawthorn was rendered as Caluetun in the Domesday Book, [1] and is derived from the Old English terms calf and tun, which means calf and enclosure, respectively. It meant the farm where calves are raised.

The village of Cawthorne's name appeared as Caltorne in the Domesday Book. Further research revealed that the name is derived from the Old English terms cald and thorne, which mean cold and thorn tree, respectively. It meant exposed thorn tree, and probably indicated a location marked by a solitary thorn tree. [2]

Early Origins of the Cawthron family

The surname Cawthron was first found in Yorkshire, where the Cawthron family held a family seat from ancient times. The first known bearer of the name was William de Calthorn, who was recorded in the 1175 in Yorkshire. The spelling of the name seems to indicate that this branch of the family originated in the West Riding village of Cawthorne, documented in the Domesday Book as "Caltorne."

Over in Lancashire, Nether Wyersdale was an ancient family seat. "The ancestors of the late John Fenton Cawthorne, Esq., M. P. for Lancaster, are said to have held a portion of Wyersdale for six or seven hundred years; and George III. once contemplated the revival of the barony of Wyersdale in the person of Mr. Cawthorne, whom he intended to create lord Wyersdale. Wyreside, an elegant mansion, has long been the residence of the Cawthorne family." [3]

In nearby Over Wyersdale, a close branch of the family was found. "William Cawthorne, in 1683, gave a school-house, with a messuage, some land, and a rent-charge of £15, for which 30 boys are instructed; and another school has an allowance of £20 per annum from the Society of Friends." [3]

Early History of the Cawthron family

Before the last few hundred years, the English language had no fast system of spelling rules. For that reason, spelling variations are commonly found in early Anglo-Saxon surnames. Over the years, many variations of the name Cawthron were recorded, including Cawthorn, Cawthorne, Cauthorn, Cauthorne, Cawtharne, Cothern, Cothern, Cawthern and many more.

Notables of this surname at this time include: Thomas Cawton, the elder (1605-1659), an English clergyman of Presbyterian and Royalist views. He "was born at Rainham, Norfolk, in 1605. was born at Rainham, Norfolk, in 1605. He was sent to Queens' College, Cambridge, by Sir Roger Townshend, and became so remarkable for his piety, that profane scholars used 'Cawtonist' as 'Simeonite' or 'Puseyite' were used more recently...
Another 67 words (5 lines of text) are included under the topic Early Cawthron Notables in all our PDF Extended History products and printed products wherever possible.

Migration of the Cawthron family

To escape oppression and starvation at that time, many English families left for the "open frontiers" of the New World with all its perceived opportunities. In droves people migrated to the many British colonies, those in North America in particular, paying high rates for passages in cramped, unsafe ships. Although many of the settlers did not make the long passage alive, those who did see the shores of North America perceived great opportunities before them. Many of the families that came from England went on to make essential contributions to the emerging nations of Canada and the United States. Research into various historical records revealed some of first members of the Cawthron family emigrate to North America: Richard Cawthorne, who settled in Virginia in 1681; Jacob Cawthorn, who immigrated to Virginia in 1719; Charles Cawthorne, a convict who arrived in Maryland in 1720.