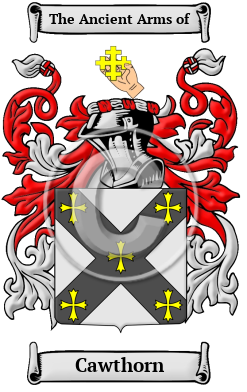 The ancient history of the Cawthorn name begins with the ancient Anglo-Saxon tribes of Britain. The name is derived from when the family resided in Cawthorn, in the North Riding of Yorkshire, or in Cawthorne, in the West Riding. While the names are superficially similar,their origins are different.

The village of Cawthorn was rendered as Caluetun in the Domesday Book, [1] and is derived from the Old English terms calf and tun, which means calf and enclosure, respectively. It meant the farm where calves are raised.

The village of Cawthorne's name appeared as Caltorne in the Domesday Book. Further research revealed that the name is derived from the Old English terms cald and thorne, which mean cold and thorn tree, respectively. It meant exposed thorn tree, and probably indicated a location marked by a solitary thorn tree. [2]

Early Origins of the Cawthorn family

The surname Cawthorn was first found in Yorkshire, where the Cawthorn family held a family seat from ancient times. The first known bearer of the name was William de Calthorn, who was recorded in the 1175 in Yorkshire. The spelling of the name seems to indicate that this branch of the family originated in the West Riding village of Cawthorne, documented in the Domesday Book as "Caltorne."

Over in Lancashire, Nether Wyersdale was an ancient family seat. "The ancestors of the late John Fenton Cawthorne, Esq., M. P. for Lancaster, are said to have held a portion of Wyersdale for six or seven hundred years; and George III. once contemplated the revival of the barony of Wyersdale in the person of Mr. Cawthorne, whom he intended to create lord Wyersdale. Wyreside, an elegant mansion, has long been the residence of the Cawthorne family." [3]

In nearby Over Wyersdale, a close branch of the family was found. "William Cawthorne, in 1683, gave a school-house, with a messuage, some land, and a rent-charge of £15, for which 30 boys are instructed; and another school has an allowance of £20 per annum from the Society of Friends." [3]

Early History of the Cawthorn family

Until quite recently, the English language has lacked a definite system of spelling rules. Consequently, Anglo-Saxon surnames are characterized by a multitude of spelling variations. Changes in Anglo-Saxon names were influenced by the evolution of the English language, as it incorporated elements of French, Latin, and other languages. Although Medieval scribes and church officials recorded names as they sounded, so it is common to find one person referred to by several different spellings of his surname, even the most literate people varied the spelling of their own names. Variations of the name Cawthorn include Cawthorn, Cawthorne, Cauthorn, Cauthorne, Cawtharne, Cothern, Cothern, Cawthern and many more.

Notables of this surname at this time include: Thomas Cawton, the elder (1605-1659), an English clergyman of Presbyterian and Royalist views. He "was born at Rainham, Norfolk, in 1605. was born at Rainham, Norfolk, in 1605. He was sent to Queens' College, Cambridge, by Sir Roger Townshend, and became so remarkable for his piety, that profane scholars used 'Cawtonist' as 'Simeonite' or 'Puseyite' were used more recently...
Another 67 words (5 lines of text) are included under the topic Early Cawthorn Notables in all our PDF Extended History products and printed products wherever possible.

Cawthorn migration to the United States +

Searching for a better life, many English families migrated to British colonies. Unfortunately, the majority of them traveled under extremely harsh conditions: overcrowding on the ships caused the majority of the immigrants to arrive diseased, famished, and destitute from the long journey across the ocean. For those families that arrived safely, modest prosperity was attainable, and many went on to make invaluable contributions to the development of the cultures of the new colonies. Research into the origins of individual families in North America revealed records of the immigration of a number of people bearing the name Cawthorn or a variant listed above:

Cawthorn Settlers in United States in the 18th Century

Cawthorn Settlers in United States in the 19th Century

Cawthorn Settlers in Australia in the 19th Century