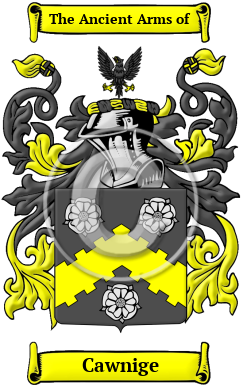 The surname Cawnige is a Welsh name that was first held when the Cawnige family lived in the English county of Cornwall. As a general rule, the greater the distance between individuals and their homelands, the larger the territory they were named after. For example, people who only moved to another parish would be known by the name of their original village, while people who migrated to a different country were often known by the name of a region or country from which they came. Consequently, the name Cawnige was not originally applied to a lifelong resident of Cornwall, but rather to someone who emigrated from Cornwall to another region. [1]

Early Origins of the Cawnige family

The surname Cawnige was first found in Devon, England where the "surname is derived from a geographical locality. 'the Cornish,' a Cornish man. We do not expect to find Cornish in Cornwall, but in Devonshire. Coming over the border the stranger would be called Cornish from the county he had left. Hence Cornish is rare in Cornwall and common in Devonshire. We may safely conclude that when we find Cornish in Cornwall the bearer has returned to the county whence his ancestors sprang." [2]

Early History of the Cawnige family

There are relatively few surnames native to Wales, but they have an inordinately large number of spelling variations. Early variations of Welsh surnames can be explained by the fact that very few people in the early Middle Ages were literate. Priests and the few other literate people were responsible for recording names in official documents. And because most people could not specific how to properly record their names it was up to the individual recorder of that time to determine how a spoken name should be recorded. Variations due to the imprecise or improper recording of a name continued later in history when names originally composed in the Brythonic Celtic, language of Wales, known by natives as Cymraeg, were transliterated into English. Welsh names that were documented in English often changed dramatically since the native language of Wales, which was highly inflected, did not copy well. Occasionally, however, spelling variations were carried out according to an individual's specific design: a branch loyalty within the family, a religious adherence, or even patriotic affiliations could be indicated by minor variations. The spelling variations of the name Cawnige have included Cornish, Cornishe, Corniss, Cornise, Carnish, Cornich, Corniche, Cornick and many more.

Prominent amongst the family during the late Middle Ages was William Cornysh the Younger (also spelled Cornyshe or Cornish) (1465-1523), an English composer, dramatist, actor, and poet. His only surviving poem, was written in Fleet Prison. Henry Cornish (died 1685), was a London Alderman of the ward...
Another 47 words (3 lines of text) are included under the topic Early Cawnige Notables in all our PDF Extended History products and printed products wherever possible.

Migration of the Cawnige family

Many Welsh families joined their Scottish and Irish neighbors during the late 1800s and early 1900s in seeking refuge in North America. Like the Irish and Scottish, many Welsh anxiously awaited the work, freedom, and opportunities that they believed lay in North America. Those who did journey over to the United States and what became known as Canada often realized those dreams, but only through much toil and perseverance. Whenever and however these Welsh immigrants arrived in North America, they were instrumental in the creation of the industry, commerce, and cultural heritage within those two developing nations. In the immigration and passenger lists a number of early immigrants bearing the name Cawnige were found: Samuel Cornish was one of the first settlers in North America, settling in Salem, Massachusetts, in 1637; and James Cornish was the first Schoolmaster and Town Clerk in Westfield, Massachusetts..