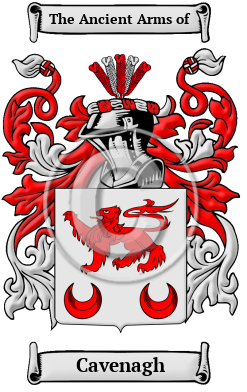 Irish names tend to vary widely in their spelling and overall form. The original Gaelic form of the name Cavenagh is Caomhanach, an adjective denoting association with St. Caomhan. The first Kavanagh, Donal, the son of Dermot MacMurrough, was fostered by a successor of this saint.

Early Origins of the Cavenagh family

The surname Cavenagh was first found in County Carlow (Irish: Cheatharlach) a small landlocked area located in the province of Leinster in the South East of Ireland, where they held a family seat from very ancient times. The Kavanaghs (Cavanaghs) were descended from the MacMorough stem and were Lords of Leinster. Donoch McMorough was the King of Leinster, son of Dermod and it was from Donoch from which the Cavanaghs sprang. They were descended directly from the Heremon Line of Irish Kings. Donell, son of Dermot MacMurrough acquired the name Caomhanach, or Cavanagh. His sister Eva married Strongbow, Earl of Pembroke, the leader of the English invasion of Ireland. [1]

Early History of the Cavenagh family

The recording of names in Ireland during the Middle Ages was an inconsistent endeavor at best. Since the general population did not know how to read or write, they could only specify how their names should be recorded orally. Research into the name Cavenagh revealed spelling variations, including Cavanagh, Kavanagh, Kavanah, Cavanaugh, Keevan, Cavanaw, Kavanaw, Cavenaugh, Cavanough, Cavaneagh, Cavana, Cavena, Cavinaugh, Kavina, Kavena, Kavanaugh, Cavanach, Kavanach, Cabenagh, O'Cavanagh, O'Kavanagh, Keaveney, Geaveney, M'Cavanna and many more.

Prominent amongst the family at this time was Cahir Mac Art Kavanagh, Lord of St. Molyns, Baron of Ballyann (d. 1554), the eldest son of Art Kavanagh of St. Molyns (Teach Molyns), and Chief of his Sept. He took part in the rebellion of the Leinster Geraldines, but submitted to Lord Leonard Grey in 1538. "He renewed his submission to Sir Anthony St. Leger in November 1540, and preferred a request to be allowed to hold his land in feudal tenure. He was anxious, he declared, to imitate his ancestor, Dermot Mac Murrough, king of Leinster, who had introduced the English...
Another 141 words (10 lines of text) are included under the topic Early Cavenagh Notables in all our PDF Extended History products and printed products wherever possible.

Cavenagh migration to the United States +

In the 19th century, thousands of Irish left their English-occupied homeland for North America. Like most new world settlers, the Irish initially settled on the eastern shores of the continent but began to move westward with the promise of owning land. The height of this Irish migration came during the Great Potato Famine of the late 1840s. With apparently nothing to lose, Irish people left on ships bound for North America and Australia. Unfortunately a great many of these passengers lost their lives - the only thing many had left - to disease, starvation, and accidents during the long and dangerous journey. Those who did safely arrive in "the land of opportunities" were often used for the hard labor of building railroads, coal mines, bridges, and canals. The Irish were critical to the quick development of the infrastructure of the United States and Canada. Passenger and immigration lists indicate that members of the Cavenagh family came to North America quite early:

Cavenagh Settlers in United States in the 17th Century

Cavenagh Settlers in United States in the 18th Century

Cavenagh Settlers in United States in the 19th Century

Cavenagh Settlers in Canada in the 18th Century

Cavenagh Settlers in New Zealand in the 19th Century