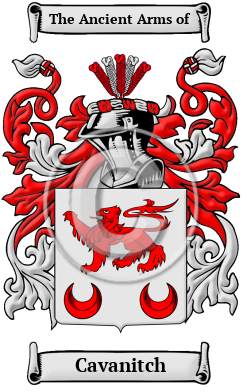 Irish names tend to vary widely in their spelling and overall form. The original Gaelic form of the name Cavanitch is Caomhanach, an adjective denoting association with St. Caomhan. The first Kavanagh, Donal, the son of Dermot MacMurrough, was fostered by a successor of this saint.

Early Origins of the Cavanitch family

The surname Cavanitch was first found in County Carlow (Irish: Cheatharlach) a small landlocked area located in the province of Leinster in the South East of Ireland, where they held a family seat from very ancient times. The Kavanaghs (Cavanaghs) were descended from the MacMorough stem and were Lords of Leinster. Donoch McMorough was the King of Leinster, son of Dermod and it was from Donoch from which the Cavanaghs sprang. They were descended directly from the Heremon Line of Irish Kings. Donell, son of Dermot MacMurrough acquired the name Caomhanach, or Cavanagh. His sister Eva married Strongbow, Earl of Pembroke, the leader of the English invasion of Ireland. [1]

Early History of the Cavanitch family

People who were accounted for by scribes and church officials often had their name recorded many different ways because pronunciation was the only guide those scribes and church officials had to go by. This resulted in the problem of one person's name being recorded under several different variations, creating the illusion of more than one person. Among the many spelling variations of the surname Cavanitch that are preserved in archival documents are Cavanagh, Kavanagh, Kavanah, Cavanaugh, Keevan, Cavanaw, Kavanaw, Cavenaugh, Cavanough, Cavaneagh, Cavana, Cavena, Cavinaugh, Kavina, Kavena, Kavanaugh, Cavanach, Kavanach, Cabenagh, O'Cavanagh, O'Kavanagh, Keaveney, Geaveney, M'Cavanna and many more.

Prominent amongst the family at this time was Cahir Mac Art Kavanagh, Lord of St. Molyns, Baron of Ballyann (d. 1554), the eldest son of Art Kavanagh of St. Molyns (Teach Molyns), and Chief of his Sept. He took part in the rebellion of the Leinster Geraldines, but submitted to Lord Leonard Grey in 1538. "He renewed his submission to Sir Anthony St. Leger in November 1540, and preferred a request to be allowed to hold his land in feudal tenure. He was anxious, he declared, to imitate his ancestor, Dermot Mac Murrough, king of Leinster, who had introduced the English...
Another 141 words (10 lines of text) are included under the topic Early Cavanitch Notables in all our PDF Extended History products and printed products wherever possible.

Migration of the Cavanitch family

Irish families left their homeland in astonishing numbers during the 19th century in search of a better life. Although individual reasons vary, most of these Irish families suffered from extreme poverty, lack of work opportunities, and exorbitant rents in their homeland. Many decided to travel to Australia or North America in the hopes of finding greater opportunities and land. The Irish immigrants that came to North America initially settled on the East Coast, often in major centers such as Boston or New York. But like the many other cultures to settle in North America, the Irish traveled to almost any region they felt held greater promise; as a result, many Irish with gold fever moved all the way out to the Pacific coast. Others before that time left for land along the St. Lawrence River and the Niagara Peninsula, or the Maritimes as United Empire Loyalists, for many Irish did choose to side with the English during the American War of Independence. The earliest wave of Irish migration, however, occurred during the Great Potato Famine of the 1840s. An examination of early immigration and passenger lists has revealed many people bearing the Cavanitch name: Charles, Dudley, James, John, Joseph, Michael, Nicholas, Peter, Robert, Thomas and William Cavanagh, who all arrived in Philadelphia, Pennsylvania between 1813 and 1880.