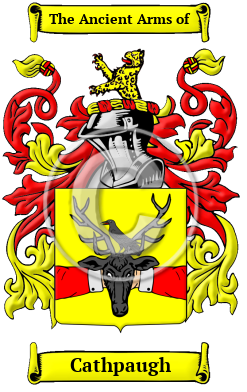 The name Cathpaugh is rooted in the ancient Anglo-Saxon culture. It was originally a name for someone who worked as a medieval policeman, called a cacherel. The name comes from the weapon carried by the cacherel, called a catchpole, used to hold people around the head so as to subdue them. The cacherel was often colloquially referred to the weapon he carried. [1]

Early Origins of the Cathpaugh family

The surname Cathpaugh was first found in Dorset or Caterpole, Suffolk. [2]

Proving the longstanding occupation, the first record of the family was found in the Domesday Book of 1086 as Aluricus Chacepol. [3] Later, Hugo le Cachepol was registered in the Assize Rolls for Somerset in 1221. Robert Chacecapel was found in the Pipe Rolls for Devon in 1201. [4]

Another source explains in more detail; in that the name was derived from "a village as well as a town officer; an undersergeant who obtained his name from catching his victim by the head by means of a long wooden forceps that nipped by the throat the delinquent who was wanted. The name was borne by Margaret Catchpole, the horse-thief who was sentenced to be hanged at Ipswich, but was transported, in 1841 [to Australia]. We have the name also as Catchpool. In 'Piers Plowman's Vision' we are told, of the two thieves crucified on Calvary, 'A Catchpole came forth And cracked both their legges.' " [5] The weapon the catchpoll carried may still be seen in the Tower of London.

Early History of the Cathpaugh family

This web page shows only a small excerpt of our Cathpaugh research. Another 163 words (12 lines of text) covering the years 1587, 1627, 1647, 1561 and 1695 are included under the topic Early Cathpaugh History in all our PDF Extended History products and printed products wherever possible.

It is only in the last few hundred years that the English language has been standardized. For that reason, early Anglo-Saxon surnames like Cathpaugh are characterized by many spelling variations. As the English language changed and incorporated elements of other European languages, even literate people changed the spelling of their names. The variations of the name Cathpaugh include Catchpole, Catchpolle, Cageypole, Cachpole, Cachpool and many more.

More information is included under the topic Early Cathpaugh Notables in all our PDF Extended History products and printed products wherever possible.

Migration of the Cathpaugh family

Many English families tired of political and religious strife left Britain for the new colonies in North America. Although the trip itself offered no relief - conditions on the ships were extremely cramped, and many travelers arrived diseased, starving, and destitute - these immigrants believed the opportunities that awaited them were worth the risks. Once in the colonies, many of the families did indeed prosper and, in turn, made significant contributions to the culture and economies of the growing colonies. An inquiry into the early roots of North American families has revealed a number of immigrants bearing the name Cathpaugh or a variant listed above: Richard Cattchpol who settled in Virginia in 1770.