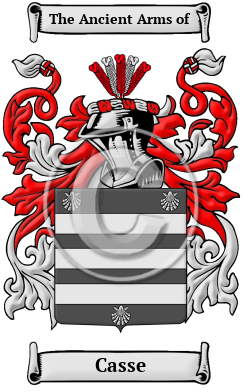 The surname Casse comes from the region of Gascogne in southwest France. It was a name for someone who lived in Gascoigne.

Early Origins of the Casse family

The surname Casse was first found in Gascony (French: Gascogne), an area of southwest France bordering Spain, that was part of the "Province of Guyenne and Gascony" prior to the French Revolution, where the family held a family seat in ancient times.

Early History of the Casse family

Throughout the course of history most surnames have undergone changes for many reasons. During the early development of the French language, a son and father may not have chosen to spell their name the same way. Many are simple spelling changes by a person who gave his name, phonetically, to a scribe, priest, or recorder. Many names held prefixes or suffixes which became optional as they passed through the centuries, or were adopted by different branches to signify either a political or religious adherence. Hence, we have many spelling variations of this name, Casse some of which are Casse, Cassé, Cassée, Casset, Casser, Cassez, Casson, Cassonne, Casault, Casot, Caseau, Caseaux, Casseau, Casseaux, Cassaud, Cazeau, Cazeaux, Cazot, Cazotte, Cazault, Cazaud, Caze, Cazes, Lecasse, Lacasse, Lecassé, Lacassé, Lacassée, Lecasset, Lacasset, Lacaze, Lecasson, Lacasonne, Lecasault, Lacazeau, Ducasse, Ducassé, Ducasset, Ducasson, Ducasault, de Casson, de Cassonne, de Caze, de Cazes, Descaseaux, Deschaseaux and many more.

Notable amongst the family at this time was Jean Baptiste du Casse (1646-1715), a French buccaneer and admiral; Dollier de Casson, a prominent Quebec missionary, explorer, architect, engineer and writer, among whose works was "Histoire de Montréal" (1672-1673), the first local history of the Montreal area, and a very true picture...
Another 50 words (4 lines of text) are included under the topic Early Casse Notables in all our PDF Extended History products and printed products wherever possible.

Casse migration to the United States +

French settlers came early to North American, following in the wake of the explorers, and creating New France. Quebec City, founded in 1608 by Samuel de Champlain is said to have been the first American site founded as a permanent settlement, rather than as just a commercial outpost. But emigration was slow, in 1643, 109 years after the first landings by Cartier, there were only about 300 French people in Quebec, and by 1663, when the region was officially made The Royal Colony of New France, by Louis XIV, there still only around 500 settlers. Over 2,000 would arrive during the next decade. Early marriage was desperately encouraged amongst the immigrants. Youths of 18 took fourteen-year-old girls for their wives. The fur trade was developed and attracted immigrants, both noble and commoner from France. By 1675, there were around 7000 French in the colony, and by that same year the Acadian presence in Nova Scotia, New Brunswick and Prince Edward Island had reached 500. In 1755, 10,000 French Acadians refused to take an oath of allegiance to England and were deported to Louisiana. Despite the loss of the Colony to England, the French people flourished in Lower Canada. Among settlers to North America of the Casse surname were

Casse Settlers in United States in the 17th Century

Casse Settlers in United States in the 18th Century

Casse Settlers in United States in the 19th Century

Casse Settlers in Canada in the 17th Century

Casse Settlers in Canada in the 18th Century

Casse Settlers in West Indies in the 17th Century