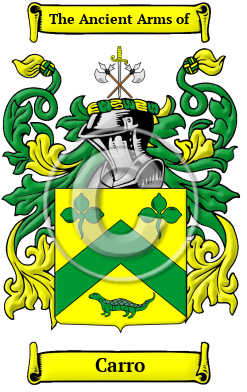 Today's Irish surnames are underpinned by a multitude of rich histories. The name Carro originally appeared in Gaelic as O Corragain.

Early Origins of the Carro family

The surname Carro was first found in Fermanagh (Irish: Fear Manach) in the southwestern part of Northern Ireland, Province of Ulster, in Ulster, where they are known to have been located since the 9th century. This family was related to the Maguires, and both families claim descent from the three Collas, who were Irish kings during the 4th century. Those of the Carro family is now scattered widely across Ireland, with the exception of Munster, where they are uncommon. The dispersion of the family had already taken place by the 16th century, when bearers of the name were recorded in the counties of Meath, Monaghan, Offaly and Roscommon. Petty's census of 1659, lists Corrigan and O'Corrigan as among the most common names in the counties of Fermanagh, Longford and Offaly.

Early History of the Carro family

This web page shows only a small excerpt of our Carro research. Another 110 words (8 lines of text) covering the years 1839, 1902, 1802, 1880 and 1866 are included under the topic Early Carro History in all our PDF Extended History products and printed products wherever possible.

Another 33 words (2 lines of text) are included under the topic Early Carro Notables in all our PDF Extended History products and printed products wherever possible.

Carro migration to the United States +

Carro Settlers in United States in the 19th Century