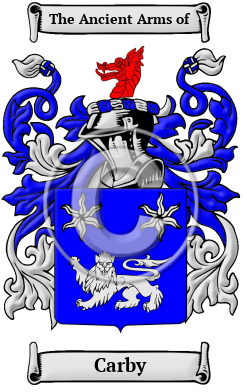 In ancient Scotland, Carby was a Strathclyde-Briton name for someone who lived in the parish of Inveresk, Lothian, which was first recorded in the form Crebarrin, from the words Gaelic craobhm meaning "tree," and barran, meaning "hedge."

Early Origins of the Carby family

The surname Carby was first found in Midlothian, where they held a family seat from very ancient times, some say well before the Norman Conquest and the arrival of Duke William at Hastings in 1066 A.D.

Early History of the Carby family

This web page shows only a small excerpt of our Carby research. Another 92 words (7 lines of text) covering the year 1230 is included under the topic Early Carby History in all our PDF Extended History products and printed products wherever possible.

In Medieval times, spelling and translation were not nearly so highly developed as today. They were generally carried out according to the sound and intuition of the bearer. For that reason spelling variations are extremely common among early Scottish names. Carby has been spelled CarBerry, Carbarry, Carbery, Carbray, Carbury, Carbrey, Carbry, Carby, Crebarin and many more.

More information is included under the topic Early Carby Notables in all our PDF Extended History products and printed products wherever possible.

Migration of the Carby family to Ireland

Some of the Carby family moved to Ireland, but this topic is not covered in this excerpt.
Another 57 words (4 lines of text) about their life in Ireland is included in all our PDF Extended History products and printed products wherever possible.

Carby migration to the United States +

Carby Settlers in United States in the 17th Century

Carby Settlers in United States in the 18th Century