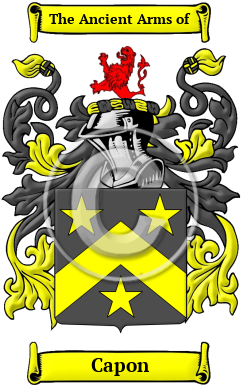 The family name Capon is one of the oldest Anglo-Saxon names of Britain. It was originally a name for a person who worked as a poultry farmer, having derived from the Old French word Capone. The surname also has origins as a nickname, which refers to a young hen.

Early Origins of the Capon family

The surname Capon was first found in Cambridgeshire, where one of the first records of the name was Simon Capun was listed in the Feet of Fines in 1227.

Early History of the Capon family

Before English spelling was standardized a few hundred years ago, spelling variations of names were a common occurrence. Elements of Latin, French and other languages became incorporated into English through the Middle Ages, and name spellings changed even among the literate. The variations of the surname Capon include Capon, Capun, Capoun, Caponne, Capunne, Caponn, Cappon and many more.

Notables of this surname at this time include: William Capon (1480-1550), an English churchman and scholar; and his brother, John Capon alias Salcot (d. 1557), Bishop of Salisbury...
Another 27 words (2 lines of text) are included under the topic Early Capon Notables in all our PDF Extended History products and printed products wherever possible.

Capon migration to the United States +

Capon Settlers in United States in the 18th Century

Capon Settlers in United States in the 19th Century

Capon Settlers in United States in the 20th Century

Capon Settlers in Canada in the 20th Century

Capon Settlers in Australia in the 19th Century

Capon Settlers in New Zealand in the 19th Century

Capon Settlers in West Indies in the 17th Century

Historic Events for the Capon family +