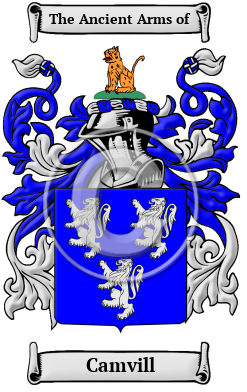 Early Origins of the Camvill family

The surname Camvill was first found in Northamptonshire where Gerald de Camvile, the grandson of the Norman adventurer held a family seat temp. Stephen at Lilburne Castle. He granted two parts of the tithes of Charletin Camvile in Somersetshire to the monks of Bermondsey in Surrey. His son, Richard de Camvile founded Combe Abbey in Warwickshire and was known as a person of great power during the reign of Henry II. [1]

Gerrard de Camville (d. 1215?), was an early judge and was "son of Richard de Camville, who is mentioned among the leaders and constables of Richard I's fleet in 1190, was appointed joint governor of Cyprus with Robert de Turneham in 1191, and died at the siege of Acre in the same year." [2]

Thomas de Camville (d. 1235), was also an early judge, third son of William, brother of Gerard de Camville, by Albreda, daughter of Geoffrey Marmion. He held the manors of Westerham in Kent and Senefield and Fobbing in Essex. [2]

Early History of the Camvill family

Camvill has been spelled many different ways. Before English spelling became standardized over the last few hundred years, spelling variations in names were a common occurrence. As the English language changed in the Middle Ages, absorbing pieces of Latin and French, as well as other languages, the spelling of people's names also changed considerably, even over a single lifetime. Spelling variants included: Camville, Canville, Camvile, Camvill, Canvill, Canfill, Canfille, Canfile, Camfill, Camfille, Canville and many more.

More information is included under the topic Early Camvill Notables in all our PDF Extended History products and printed products wherever possible.

Migration of the Camvill family

In an attempt to escape the chaos experienced in England, many English families boarded overcrowded and diseased ships sailing for the shores of North America and other British colonies. Those families hardy enough, and lucky enough, to make the passage intact were rewarded with land and a social environment less prone to religious and political persecution. Many of these families became important contributors to the young colonies in which they settled. Early immigration and passenger lists have documented some of the first Camvills to arrive on North American shores: the name represented in many forms and recorded from the mid 17th century in the great migration from Europe. Migrants settled in the eastern seaboard from Newfoundland, to Maine, to Virginia, the Carolinas, and to the islands..