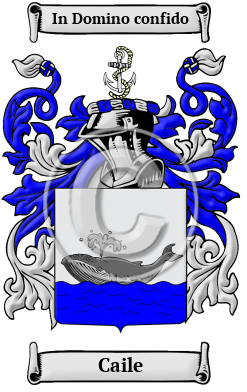 Early Origins of the Caile family

The surname Caile was first found in County Kerry and Tipperary as there are at least two distinct septs of the name. The first sept from County Kerry descend from the Heremon line of kings and were known as the Cahills of Connaught. The second sept claim descent from the Ir line of kings and were located at Corkashinny, or the parish of Templemore, Tipperary. This line further branched to the eponymous Ballycahill, Tipperary. Both branches descended from O'Connors, the Kings of Connacht, specifically "Cathal," also known as Conor na Luinge Luaithe, when anglicized means "Conor, the Swifter-Sailing Ship" [1] which may elude to the seafaring coat of arms used by the family.

Early History of the Caile family

This web page shows only a small excerpt of our Caile research. Another 138 words (10 lines of text) covering the years 1654, 1796 and 1864 are included under the topic Early Caile History in all our PDF Extended History products and printed products wherever possible.

The spelling of names in Ireland during the Middle Ages was rarely consistent. This inconsistency was due to the scribes and church officials' attempts to record orally defined names in writing. The common practice of recording names as they sounded resulted in spelling variations such as Cahill, O'Cahill, Kahill, Cawhill, Cahille, Cahil, Cahaly, Cahell, Cahel, Caughell, Kahil, Kahel, Caill, Cail and many more.

Notable among the family name at this time was Flan O'Cahill, martyred in 938; Daniel O'Cahill, brother of Bogh O'Cahill, chief of the Clan, forfeited under the...
Another 26 words (2 lines of text) are included under the topic Early Caile Notables in all our PDF Extended History products and printed products wherever possible.

Caile Settlers in Australia in the 19th Century