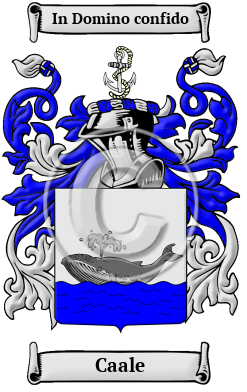 Early Origins of the Caale family

The surname Caale was first found in County Kerry and Tipperary as there are at least two distinct septs of the name. The first sept from County Kerry descend from the Heremon line of kings and were known as the Cahills of Connaught. The second sept claim descent from the Ir line of kings and were located at Corkashinny, or the parish of Templemore, Tipperary. This line further branched to the eponymous Ballycahill, Tipperary. Both branches descended from O'Connors, the Kings of Connacht, specifically "Cathal," also known as Conor na Luinge Luaithe, when anglicized means "Conor, the Swifter-Sailing Ship" [1] which may elude to the seafaring coat of arms used by the family.

Early History of the Caale family

This web page shows only a small excerpt of our Caale research. Another 138 words (10 lines of text) covering the years 1654, 1796 and 1864 are included under the topic Early Caale History in all our PDF Extended History products and printed products wherever possible.

Because early scribes and church officials often spelled names as they sounded, a person could have many various spellings of his name.Many different spelling variations of the surname Caale were found in the archives researched. These included Cahill, O'Cahill, Kahill, Cawhill, Cahille, Cahil, Cahaly, Cahell, Cahel, Caughell, Kahil, Kahel, Caill, Cail and many more.

Notable among the family name at this time was Flan O'Cahill, martyred in 938; Daniel O'Cahill, brother of Bogh O'Cahill, chief of the Clan, forfeited under the...
Another 26 words (2 lines of text) are included under the topic Early Caale Notables in all our PDF Extended History products and printed products wherever possible.

Migration of the Caale family

Thousands of Irish left in their homeland in the 18th and 19th centuries to escape the religious and political discrimination they experienced primarily at the hands of the English, and in the search of a plot of land to call their own. These immigrants arrived at the eastern shores of North America, early on settling and breaking the land, and, later, building the bridges, canals, and railroads essential to the emerging nations of United States and Canada. Many others would toil for low wages in the dangerous factories of the day. Although there had been a steady migration of Irish to North America over these years, the greatest influx of Irish immigrants came to North America during the Great Potato Famine of the late 1840s. Early North American immigration records have revealed a number of people bearing the Irish name Caale or a variant listed above: Elizabeth Cahill, a bonded passenger, who arrived in America in 1735; Thomas Cahill, an "enforced emigrant" sent to America from Ireland in 1737.