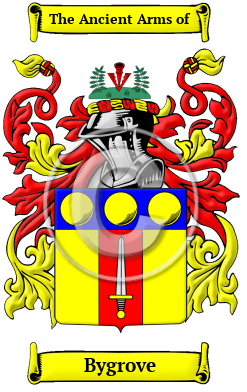 The ancestors of the Bygrove surname lived among the ancient Anglo-Saxon culture. The name comes from when they lived in Hertfordshire, where they held lands and a family seat at Bygrave. Originally the surname was derived from the Old English word biggrafau which meant dweller by the ditch. This name is a toponymic, surname, which is derived from nearby geographical features.

Early Origins of the Bygrove family

The surname Bygrove was first found in Hertfordshire where they held a family seat as Lords of the manor of Bygrave in that shire. The name in Saxon was "Biggrafan" having nothing to do with the grave or being by a grave. Before the Norman Conquest Leommaer Bygrave held a family seat at Bygrave in the year 1015, and most likely gave his name to the village of that name. At the time of the taking of the Domesday Book the Bygraves held their land which consisted of a village and a mill from the Bishop of Chester.

Early History of the Bygrove family

This web page shows only a small excerpt of our Bygrove research. Another 97 words (7 lines of text) covering the years 1312, 1586, 1643, 1610 and 1680 are included under the topic Early Bygrove History in all our PDF Extended History products and printed products wherever possible.

Before English spelling was standardized a few hundred years ago, spelling variations of names were a common occurrence. Elements of Latin, French and other languages became incorporated into English through the Middle Ages, and name spellings changed even among the literate. The variations of the surname Bygrove include Bygrove, Bygroves, Bygrave, Bygraves, Bigrove, Bigroves, Bigrave, Bigraves, Bargrave and many more.

Another 47 words (3 lines of text) are included under the topic Early Bygrove Notables in all our PDF Extended History products and printed products wherever possible.

Bygrove Settlers in Australia in the 19th Century