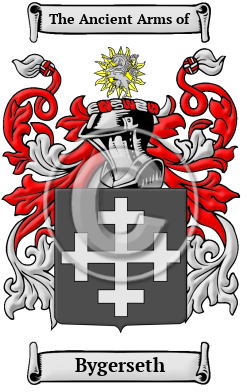 The name Bygerseth first arose amongst the Anglo-Saxon tribes of Britain. It is derived from their having lived in or near the village of Bickerstaffe, which was located near Ormskirk in the county of Lancashire. "In 1066 Bickerstaffe, under the name of Achetun, was one of the manors of Uctred, lord of Roby." [1] One of the first records of the family was Adam de Bickerstath whose son Ralph, held manor in 1212. "Adam de Bickerstath's name frequently appears in charters and other public acts of the time." [1]

Early Origins of the Bygerseth family

The surname Bygerseth was first found in Lancashire, at Bickerstaffe, a village and civil parish in the West Lancashire district. The village dates back to at least the 12th century when it was listed as Bikerstad and literally meant "landing place of the bee-keepers" from the Old English words bicere + staeth. [2] However, another reference claims the name came from the Old English word "bicker," meaning to skirmish or contend, as in bicker-staff, a weapon analogous to a quarter-staff. [3] This latter interpretation only occurs once through our research library and is mentioned here for reference purposes only as the former interpretation is more likely.

Early History of the Bygerseth family

This web page shows only a small excerpt of our Bygerseth research. Another 48 words (3 lines of text) covering the years 1639, 1714, 1685, 1713 and are included under the topic Early Bygerseth History in all our PDF Extended History products and printed products wherever possible.

One relatively recent invention that did much to standardize English spelling was the printing press. However, before its invention even the most literate people recorded their names according to sound rather than spelling. The spelling variations under which the name Bygerseth has appeared include Bickerstaffe, Bickerstaff, Bickerstath, Bickerstathe, Bickersteth and many more.

Another 40 words (3 lines of text) are included under the topic Early Bygerseth Notables in all our PDF Extended History products and printed products wherever possible.

Migration of the Bygerseth family to Ireland

Some of the Bygerseth family moved to Ireland, but this topic is not covered in this excerpt.
Another 83 words (6 lines of text) about their life in Ireland is included in all our PDF Extended History products and printed products wherever possible.

Migration of the Bygerseth family

At this time, the shores of the New World beckoned many English families that felt that the social climate in England was oppressive and lacked opportunity for change. Thousands left England at great expense in ships that were overcrowded and full of disease. A great portion of these settlers never survived the journey and even a greater number arrived sick, starving, and without a penny. The survivors, however, were often greeted with greater opportunity than they could have experienced back home. These English settlers made significant contributions to those colonies that would eventually become the United States and Canada. An examination of early immigration records and passenger ship lists revealed that people bearing the name Bygerseth arrived in North America very early: Sarah Bickerstaff who settled in Pennsylvania in 1682.