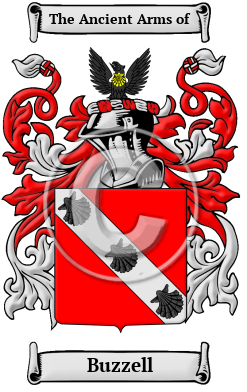 Buzzell is a name that was carried to England in the great wave of migration from Normandy following the Norman Conquest of 1066. It is a name for a person involved in the measuring and trading of corn. The name springs from the Old English root bushel, which is a measure of volume which is still in use today. [1]

Another derivation of the name suggests that it stems from the Norman French root bichelle, which means hind or deer. Which derivation is applicable depends on the geographic roots of the particular family group in question.

Alternatively the name could have originated at Bossall, a parish, partly in the wapentake of Birdforth, but chiefly in that of Bulmer, North Riding of Yorkshire. "The village was formerly large, but at present consists of only three or four houses: foundations of buildings have been discovered in an adjoining field, thence called 'Old Bossall.' "[2]

There is good reason to believe the family originated in Devon. [3] Here the chapelry, and formerly a market-town of Newton-Bushell is found in the hundred of Teignbridge. "This place received its distinguishing appellation from Robert Bussell or Bushell, foster-child and kinsman of Theobald de English Ville; he was made lord of the manor by Henry III., in 1246, and granted to the inhabitants a charter for a market." [2]

Early Origins of the Buzzell family

Another source notes that "Stephan Bussel man (i.e. the servant of Bussel)" was registered in Somerset, 1 Edward III (during the first year of the reign of King Edward III) as was Robert Busshel. [6]

Early History of the Buzzell family

This web page shows only a small excerpt of our Buzzell research. Another 115 words (8 lines of text) covering the years 1793 and 1807 are included under the topic Early Buzzell History in all our PDF Extended History products and printed products wherever possible.

The English language only became standardized in the last few centuries. For that reason, spelling variations are common among many Anglo-Norman names. The shape of the English language was frequently changed with the introduction of elements of Norman French, Latin, and other European languages; even the spelling of literate people's names were subsequently modified. Buzzell has been recorded under many different variations, including Bissell, Bichell and others.

More information is included under the topic Early Buzzell Notables in all our PDF Extended History products and printed products wherever possible.

In the United States, the name Buzzell is the 6,612nd most popular surname with an estimated 4,974 people with that name. [7]

Migration of the Buzzell family

To escape the uncertainty of the political and religious uncertainty found in England, many English families boarded ships at great expense to sail for the colonies held by Britain. The passages were expensive, though, and the boats were unsafe, overcrowded, and ridden with disease. Those who were hardy and lucky enough to make the passage intact were rewarded with land, opportunity, and social environment less prone to religious and political persecution. Many of these families went on to be important contributors to the young nations of Canada and the United States where they settled. Buzzells were some of the first of the immigrants to arrive in North America: John Bissell who arrived in west New Jersey in 1664; Thomas Bissell who settled in Virginia in 1663; Thomas Bissell arrived in Philadelphia in 1774; Charles Bissell arrived in New York City in 1822..