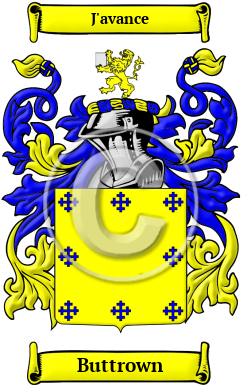 The name Buttrown reached English shores for the first time with the ancestors of the Buttrown family as they migrated following the Norman Conquest of 1066. The name Buttrown is based on the Germanic personal name Bertram, which is composed of the elements berht, meaning "bright" or "famous," and hrabn, meaning "raven."

Early Origins of the Buttrown family

The surname Buttrown was first found in Northumberland where "William de Bertram, the son or grandson of the Norman soldier, founded the Augustinian Priory of Brinkburn. His descendants - the Bertrams of Mitford castle, were potent feudal lords, distinguished in the Scottish wars and baronial contests. The last male heir, Roger Bertram, second Baron Bertram, died 1311." [1] Bertrannus was listed in the Domesday Book of 1086. [2] The History of Northumberland lists Richard Bertam as holding lands there in 1168 and Berteram le Barbur was listed in the Hundredorum Rolls of Shropshire in 1273. [3] Another source gives more details about the early influence of the family, specifically in the parish of Mitford. "This manor, in the time of the Saxons, belonged to the family of Mitford, and at the Conquest was part of the possessions of John, lord of Mitford, whose only daughter, Sybil, was married by the Conqueror to Sir Richard Bertram, son of the lord of Dignam, in Normandy. The family of Bertram became very numerous, and acquired large estates in this part of the kingdom, which they retained till the reign of John, when, taking part with the barons against that monarch, their castle here, and also the town, were burnt, and the lands laid waste, by the Flemish allies of the king; the barony, becoming forfeited to the crown, was bestowed upon Philip de Hulcoates. The possessions were subsequently restored by Henry III. to the Bertrams; but after the death of Roger de Bertram in 1242, his son and successor being taken prisoner among the insurgents at Northampton, the castle and estates were seized by the king, and never regained. The castle was taken and dismantled by Alexander, King of Scotland, in 1318." [4] Nunriding a township, in the parish of Mitford, was anciently called Baldwineswood and was home to Roger Bertram who during the reign of Henry II, gave the lands to the Benedictine convent of Hallystone. [4] Another branch of the family was found at Earsdon in Northumberland. "Sir John Bertram, Knt., who died in 1449, possessed of 16 messuages, 14 cottages, 8 acres of meadow, 494 of arable land, 400 of wood, and 300 of moor, in 'Eresdon.'" [4]

Early History of the Buttrown family

This web page shows only a small excerpt of our Buttrown research. Another 216 words (15 lines of text) covering the years 1168, 1296 and 1482 are included under the topic Early Buttrown History in all our PDF Extended History products and printed products wherever possible.

It is only in the last few hundred years that the English language has been standardized. For that reason, Anglo-Norman surnames like Buttrown are characterized by many spelling variations. Scribes and monks in the Middle Ages spelled names they sounded, so it is common to find several variations that refer to a single person. As the English language changed and incorporated elements of other European languages such as Norman French and Latin, even literate people regularly changed the spelling of their names. The variations of the name Buttrown include Bertram, Bartram, Battram, Berttram, Beartram, Beertram, Bertrim, Bertrem, Berttrim, Berttrem, Barttrem, Bartrim, Bertrame, Bartramn, Bartramm, Bertramm, Bortram, Bortrem and many more.

More information is included under the topic Early Buttrown Notables in all our PDF Extended History products and printed products wherever possible.

Migration of the Buttrown family

Faced with the chaos present in England at that time, many English families looked towards the open frontiers of the New World with its opportunities to escape oppression and starvation. People migrated to North America, as well as Australia and Ireland in droves, paying exorbitant rates for passages in cramped, unsafe ships. Many of the settlers did not make the long passage alive, but those who did see the shores of North America were welcomed with great opportunity. Many of the families that came from England went on to make essential contributions to the emerging nations of Canada and the United States. Some of the first immigrants to cross the Atlantic and come to North America carried the name Buttrown, or a variant listed above: John Bertram, who settled in Virginia in 1650; Peter Bertram, who landed in America in 1709; Thomas Bertram, who settled in Texas in 1836. Another Thomas settled in Georgia in 1821.