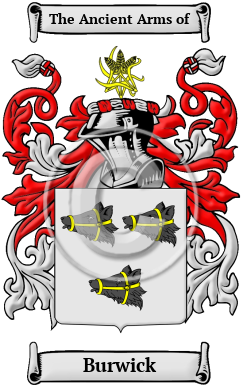 Early Origins of the Burwick family

The surname Burwick was first found in Berwickshire in Scotland and Northumberland in England, where "this surname is derived from the famous Border town of the same name. Rather curiously the surname is not uncommon at the present day in Fife. John de Berwic was rector of Renfrew in 1295, and in the year following Geoffry of Berewick, Burgess of Roxburgh, rendered homage [to King Edward I of England]. " [1]

Further to the south in England, John de Berewyk (d. 1312), was an English judge, who "was entrusted with the charge of the vacant abbey of St. Edmund, 1278-1279, and of the see of Lincoln during the interval which elapsed between the death of Benedict, otherwise Richard, de Gravesend, 1279, and the appointment of his successor in the episcopate, Oliver Sutton, 1280-1281." [2]

In Wiltshire, there were two early listings in the Hundredorum Rolls of 1273: Sampson de Berwyk; and Philip de Berwyke. [3]

Early History of the Burwick family

This web page shows only a small excerpt of our Burwick research. Another 77 words (6 lines of text) covering the years 1476, 1615, 1628, 1629 and 1728 are included under the topic Early Burwick History in all our PDF Extended History products and printed products wherever possible.

The name Burwick, appeared in many references, and from time to time, the surname was spelt Berwick, Bewick, Berwicke, Bewicke and others.

More information is included under the topic Early Burwick Notables in all our PDF Extended History products and printed products wherever possible.

Burwick migration to the United States +

The New World beckoned as many of the settlers in Ireland, known as the Scotch/Irish, became disenchanted. They sailed aboard the armada of sailing ships known as the "White Sails" which plied the stormy Atlantic. Some called them, less romantically, the "coffin ships." Amongst the early settlers who could be considered kinsmen of the Burwick family, or who bore a variation of the surname Burwick were

Burwick Settlers in United States in the 19th Century