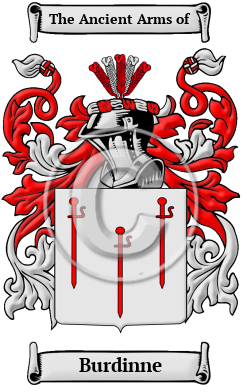 The Burdinne name comes from that Medieval landscape of northwestern France known as Brittany. The name Burdinne was originally derived from the family having lived in Brittany.

Early Origins of the Burdinne family

The surname Burdinne was first found in Brittany (French: Bretagne), where the family held a family seat from ancient times.

The family first established itself as an important participant in the cultural and political events of the region in 1175. Eon Bourdin, an archer, was first registered in 1420 for his involvement in the liberation of an imprisoned duke. The family continued to prosper and eventually branched out into Normandy. The family line of Bourdon de La Croix was registered in the region both in 1423 and in 1535. Several members of the Bourdon family were subjects of the King's court at Alençon in the 17th century. Claude Bourdon, a squire and the Lord of Gruchy, was also a political adviser in Caen in 1700.

Jacques Bourdon, born in 1650, son of Jean and Magloire of St.Godard in Rouen, travelled from France to Canada in the 17th century. After arriving in Quebec he married Marie Menard, daughter of Jacques and Catherine, at Boucherville on 8th February 1672. [1]

Early History of the Burdinne family

This web page shows only a small excerpt of our Burdinne research. More information is included under the topic Early Burdinne History in all our PDF Extended History products and printed products wherever possible.

Changes of spelling have occurred in most surnames. The earliest explanation is that during the early development of the French language, names were not yet fixed in spelling. Usually a person gave his version of his name, phonetically, to a scribe, a priest, or a recorder. This depended on accent, and local accents frequently changed the spelling of a name. Some variables were adopted by different branches of the family name. Hence, there are some spelling variations of the name Burdinne, including Bourdon, Bourdin, Bourdine, Bourdonneau and many more.

Notable amongst this name at this time was Jacques Bourdin, the Lord of Chars and of Villeines in the Touraine region, who became the secretary to Charles IX; Jacques Bourdon, bailiff of the duchy of Elbeuf; Sébastien Bourdon (1616-1671), French painter and drawer in the city of Montpellier; François Louis Bourdon, also known as Bourdon de l'Oise, a French revolutionary...
Another 60 words (4 lines of text) are included under the topic Early Burdinne Notables in all our PDF Extended History products and printed products wherever possible.

Migration of the Burdinne family

In 1643, 109 years after the first landings by Cartier, there were only about 300 people in Quebec. Migration was slow. The fur trade attracted migrants, both noble and commoner. By 1675, there were 7000 French in Quebec. By the same year the French Acadian presence in the Maritimes had reached 500. The French founded Lower Canada, thus becoming one of the two great founding nations of Canada. The family name Burdinne has made many distinguished contributions in France and New France to the world of science, culture, religion, and education. Amongst the settlers in North America with this distinguished name Burdinne were Jacques Bourdin, who settled in Quebec in 1665; Jacques Bourdon, who arrived in Louisiana in 1755; Michael Bourdine, who arrived in New York in 1801; Jean Bourdin, who settled in New Orleans, Louisiana in 1822.