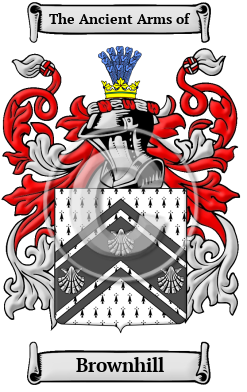 The Brownhill surname is thought to be a habitational name, created from any of various places in England called Brownell. There was a Brownell in Yorkshire, in Cheshire, and in Staffordshire. These place names in turn come from the Old English "brun,"meaning "brown," and "hyll" meaning "a hill." [1]

Early Origins of the Brownhill family

The surname Brownhill was first found in Derbyshire where they held a family seat from very ancient times. The Brownhill surname may even pre-date the Norman Conquest and the arrival of Duke William at Hastings in 1066 A.D.

Early History of the Brownhill family

This web page shows only a small excerpt of our Brownhill research. Another 59 words (4 lines of text) covering the years 1275 and 1329 are included under the topic Early Brownhill History in all our PDF Extended History products and printed products wherever possible.

Spelling variations of this family name include: Brownell, Brounell, Brownel and others.

More information is included under the topic Early Brownhill Notables in all our PDF Extended History products and printed products wherever possible.

Brownhill migration to the United States +

Brownhill Settlers in United States in the 17th Century

Brownhill Settlers in Australia in the 19th Century

Brownhill Settlers in New Zealand in the 19th Century