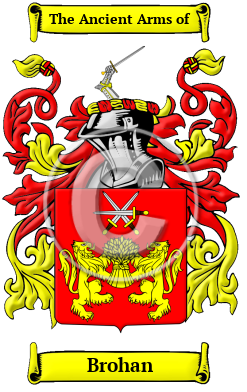 Many variations of the name Brohan have evolved since the time of its initial creation. In Gaelic it appeared as "O Braondin," from the word "braon," which has several meanings, possibly meaning "sorrow" in this case.

Early Origins of the Brohan family

The surname Brohan was first found in County Kilkenny (Irish: Cill Chainnigh), the former Kingdom of Osraige (Ossory), located in Southeastern Ireland in the province of Leinster, where the family claim descent from Braonan, an Irish Prince, brother of Ceallach, 17th King of Ossory. Braonan later became the King of Ossory, and also King of the Danes of Dublin, and was known as the Prince of Idough. His son, Conglach, in a dispute over the throne of Ossory, was killed near Three Castles, County Kilkenny.

Early History of the Brohan family

Before widespread literacy came to Ireland, a name was often recorded under several different variations during the life of its bearer. Accordingly, numerous spelling variations were revealed in the search for the origin of the name Brohan family name. Variations found include Brennan, McBrennan, Brannon, Brannan, Brannen, Brannin, Brennyn, Brannyn, MacBrennan, Brenan, Branon, Branan, Branen and many more.

Notable among the family name at this time was Sir Art O'Brennan of Castlecomer Castle; Most Rev. John Brennan (1625-1693), Bishop of Waterford and Archbishop of Cashel; John Brennan (1768-1830)...
Another 29 words (2 lines of text) are included under the topic Early Brohan Notables in all our PDF Extended History products and printed products wherever possible.

Brohan Settlers in Australia in the 19th Century

Brohan Settlers in New Zealand in the 19th Century