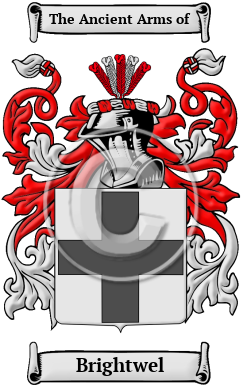 The name Brightwel is part of the ancient legacy of the Anglo-Saxon tribes of Britain. It is a product of when the family lived in either of the settlements named Brightwell in Berkshire or Suffolk, or in the place called Brightwell Baldwin in Oxfordshire.

Early Origins of the Brightwel family

The surname Brightwel was first found in Oxfordshire, where the name is associated with the village of Brightwell Baldwin. In the Domesday Book survey of 1086 Brightwell Baldwin was recorded as lands held by William the Conqueror and the Bishop of Bayeux. During the 11th century it was the site of a mill. Robert de Brictewell was registered in Oxfordshire in 1205. Brightwell Castle was built in 1145 by King Stephen in the village of Brightwell-cum-Sotwell, but was destroyed in 1153 by his cousin Matilda's son during a civil war. He would later become known as King Henry II.

Years later, Thomas Bryghtwell or Brythwell (d. 1390), was a fellow of Merton College, Oxford and is chiefly known in connection with the proceedings against Wycliffe's followers taken at the council of Blackfriars in London in 1382. [1]

Early History of the Brightwel family

The first dictionaries that appeared in the last few hundred years did much to standardize the English language. Before that time, spelling variations in names were a common occurrence. The language was changing, incorporating pieces of other languages, and the spelling of names changed with it. Brightwel has been spelled many different ways, including Brightwell, Brightwelle, Britewell, Brihtwell, Brictewell, Brichtewell, Brichwell and many more.

More information is included under the topic Early Brightwel Notables in all our PDF Extended History products and printed products wherever possible.

Migration of the Brightwel family to Ireland

Some of the Brightwel family moved to Ireland, but this topic is not covered in this excerpt. More information about their life in Ireland is included in all our PDF Extended History products and printed products wherever possible.

Migration of the Brightwel family

Thousands of English families in this era began to emigrate the New World in search of land and freedom from religious and political persecution. Although the passage was expensive and the ships were dark, crowded, and unsafe, those who made the voyage safely were rewarded with opportunities unavailable to them in their homeland. Research into passenger and immigration lists has revealed some of the very first Brightwels to arrive in North America: John Brightwell, who settled in Nova Scotia in 1749.