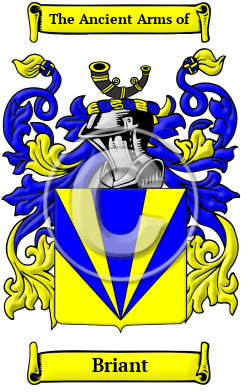 The ancient surname Briant came from Brian an Old Norman name, but may also be traced further back to its original form Brjan.

Early Origins of the Briant family

The surname Briant was first found in Denbigh, a market town in Denbighshire, North Wales. "The great baronial house of Bryan became extinct in the male line at the death in 1390 of Guy de Bryan, Baron Bryan who served as standard bearer to Edward III in the celebrated fight with the French at Calais. " [1]

Another source claims the name came from three locations: Tor-Bryan in Devon; Langheren, in South Wales, and at Woodford Castle, county Dorset. "Of this family was the chivalrous Sir Guy Bryan, Lord Bryan, K.G. temp. Edward III., and standard bearer at the celebrated battle of Calais. " [2]

This source continues "The Christian name Guy was frequent in the family." Yet another source claims a similar story with a different surname spelling. In this case, this source is referring to the parish of Slapton in Devon. "This place belonged to Sir Guy de Brien, Knt., standardbearer to Edward III., whom he attended at the battle of Calais in 1349, on which occasion, having greatly distinguished himself by his intrepidity, he was rewarded with a grant of 200 marks per annum, payable out of the exchequer during his life. Sir Guy founded a chantry in the church for a rector and four priests, and endowed it with £10 per annum in land, and with the advowson of the living." [3]

"Slapton [Devon] belonged to the ancient family of De Brian as early as the reign of Henry II., and descended to the Percy Earls of Northumberland, as the representative of Sir Guy de Brian the younger, through the sole heiress. Guy de Brian, one of the first Knights of the Garter, founded a collegiate chantry at Slapton in 1373, and the remains of his house are known as Poole Priory." [4]

"Tor Brian [in Devon] is linked with several names of note, the most famous of its early lords being one of the foremost of Devon's worthies. Sir Guy de Brian, standard-bearer to Edward III., did such service at Calais that he had a grant of 200 marks yearly out of the Exchequer. In 1354 he went to Rome with Henry, Duke of Lancaster, to procure a ratification of the league between England and France from the Pope. In 1370 he again served in France, and in the same year illustrated his many-sided character still further by becoming Admiral of the king's fleet. Edward showed his esteem for Sir Guy by choosing him one of the Knights of the Garter. De Brian served Richard II. with equal success in France and in Ireland, by land and by sea, in the camp and in the court. He founded and endowed a collegiate church in his manor of Slapton, already noted, and died at an advanced age in 1391, leaving two granddaughters only. " [4]

Early History of the Briant family

Since the Old and Middle English languages lacked definite spelling rules, Breton surnames have many spelling variations. Latin and French, which were the official court languages, were also influential on the spelling of surnames. The spelling of surnames was rarely consistent in medieval times, and scribes and church officials recorded names as they sounded rather than adhering to any specific spelling rules. Therefore, it was common to find the same individual referred to with different spellings of their surname in the ancient chronicles. Moreover, a large number of foreign names were brought into England after the Norman Conquest, which accelerated and accentuated the alterations to the spelling of various surnames. The name has been spelled Bryan, Bryant, Brian, Breine, Brine, Bryand, Briand, Briant, Bryane and many more.

Notable of this family during the Middle Ages was Sir Thomas Bryan KS KB (died 1500), a British justice, Chief Justice of the Common Pleas (1471-1500); and his son, Sir Thomas Bryan (died 1518) was an English courtier during the reign of Henry VIII; Sir Francis Bryan (ca. 1490-1549), English nobleman, Lord Chief Justice of Ireland; John Bryan, D.D...
Another 59 words (4 lines of text) are included under the topic Early Briant Notables in all our PDF Extended History products and printed products wherever possible.

Migration of the Briant family to Ireland

Some of the Briant family moved to Ireland, but this topic is not covered in this excerpt.
Another 96 words (7 lines of text) about their life in Ireland is included in all our PDF Extended History products and printed products wherever possible.

Briant migration to the United States +

Early immigration records have shown some of the first of the name Briant to arrive on North American shores were:

Briant Settlers in United States in the 17th Century

Briant Settlers in United States in the 18th Century

Briant Settlers in United States in the 19th Century

Briant Settlers in Australia in the 18th Century

Briant Settlers in Australia in the 19th Century

Briant Settlers in New Zealand in the 19th Century

Historic Events for the Briant family +