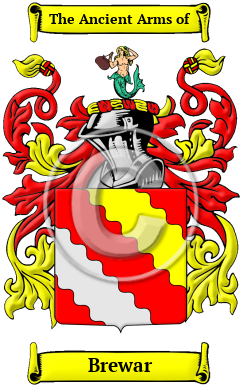 Brewar is a name of ancient Norman origin. It arrived in England with the Norman Conquest of 1066. The Brewar family lived in Devon. The name comes from the Norman area of Brovera or Brueria, now Breviare, near Caen, in Normandy. In its more obvious Old English derivation, the name indicates the bearer is a professional brewer of beers or ales, and stems from the root breowan, of the same meaning.

Early Origins of the Brewar family

The surname Brewar was first found in Devon where they were found "at the time of the Domesday Survey and founded Tor Abbey." [1] Another source provides more detail. "Of 32 Praemonstratensian monasteries in England, that of Torre, founded and endowed by William de Brewer in 1196, was by far the richest; it was dedicated to Our Holy Saviour, the Virgin Mary, and the Holy Trinity. " [2]

Early History of the Brewar family

Endless spelling variations are a prevailing characteristic of Norman surnames. Old and Middle English lacked any definite spelling rules, and the introduction of Norman French added an unfamiliar ingredient to the English linguistic stew. French and Latin, the languages of the court, also influenced spellings. Finally, Medieval scribes generally spelled words according to how they sounded, so one person was often referred to by different spellings in different documents. The name has been spelled Brewer, Bruer, Bruyere, Brewyer, Breuer, Brower and others.

Migration of the Brewar family

To escape the political and religious persecution within England at the time, many English families left for the various British colonies abroad. The voyage was extremely difficult, though, and the cramped, dank ships caused many to arrive in the New World diseased and starving. But for those who made it, the trip was most often worth it. Many of the families who arrived went on to make valuable contributions to the emerging nations of Canada and the United States. An inquiry into the early roots of North American families reveals a number of immigrants bearing the name Brewar or a variant listed above: Daniel Brewer who settled in Barbados in 1680; John Brewer and his wife Marie, who came to Boston Massachusetts in 1632; Obadiah Brewer, who was on record in New England in 1647.