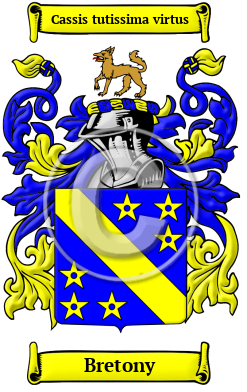 The Norman Conquest of England in 1066 added many new elements to an already vibrant culture. Among these were thousands of new names. The Bretony family lived in Essex. The name is a reference to the French province of Brettagne or Brittany. Families from this area largely consisted of the descendants of Celtic tribes who were originally forced to flee ancient Britain from the Roman Tyrant, Maximus, around 384 AD, and settled across the Channel. When the Romans left, the settlement remained, and carries the name to this day. From about 950 onwards, the Dukes of Brittany became closely related to the Dukes of Normandy, and even accompanied them at Hastings in 1066. Many of the Brettagne families who were granted land by William, Duke of Normandy had come in a complete circle, settling again on their former homeland in Powys, on the English-Welsh border.

Early Origins of the Bretony family

The surname Bretony was first found in the Domesday Book of 1086 where "no less than nine of this name appear: all of them probably Breton knights that had followed the fortunes of Alain-le-Roux or his kinsmen. Alured Brito held of the King a barony of twenty-two lordships in Devonshire: Gozelin another in Bucks, Gloucester, and Bedfordshire; Oger one in Leicester and Lincoln; Rainald one in Sussex; Tihel one in Essex and Norfolk; Waldeve one in Lincoln and Cheshire; and Maigno or Manno Brito one in Bucks and Leicestershire. Two others, Roger and William, were mesne-lords in Somerset and Huntingdon." [1]

Early History of the Bretony family

Norman surnames are characterized by a multitude of spelling variations. The frequent changes in surnames are largely due to the fact that the Old and Middle English languages lacked definite spelling rules. The introduction of Norman French to England, as well as the official court languages of Latin and French, also had pronounced influences on the spelling of surnames. Since medieval scribes and church officials recorded names as they sounded, rather than adhering to any specific spelling rules, it was common to find the same individual referred to with different spellings. The name has been spelled Breton, Britain, Britayne, Briton, Brittain, Brittaine, Brittan, Britten, Brittenie, Brittin, Britting, Britton, Brittone, Brettain, Bretaine, Bretayne, Brettin, Bretin, Brettan, Brettinie, Brettony, Brittany, Brettany, Britteny, Brittiny and many more.

Outstanding amongst the family at this time was John de Breton (died 1275), medieval Bishop of Hereford, royal justice and sheriff, generally attributed to the term "Britton," the earliest summary of the law of England, written in French; and Nicholas Breton (1545-1626), English poet and novelist, from an old family settled at Layer-Breton, Essex. "His grandfather, William Breton of Colchester, died in 1499, and was buried there in the monastery of St. John. His father, also William Breton, was a younger son, came...
Another 82 words (6 lines of text) are included under the topic Early Bretony Notables in all our PDF Extended History products and printed products wherever possible.

Migration of the Bretony family to Ireland

Some of the Bretony family moved to Ireland, but this topic is not covered in this excerpt.
Another 35 words (2 lines of text) about their life in Ireland is included in all our PDF Extended History products and printed products wherever possible.

Migration of the Bretony family

Many English families emigrated to North American colonies in order to escape the political chaos in Britain at this time. Unfortunately, many English families made the trip to the New World under extremely harsh conditions. Overcrowding on the ships caused the majority of the immigrants to arrive diseased, famished, and destitute from the long journey across the stormy Atlantic. Despite these hardships, many of the families prospered and went on to make invaluable contributions to the development of the cultures of the United States and Canada. Early North American immigration records have revealed a number of people bearing the name Bretony or a variant listed above: Widow Breton and son who settled in Charles Town [Charleston], South Carolina in 1732; J. Breton settled in New Orleans in 1820; Elizabeth Breton settled in New York in 1820.