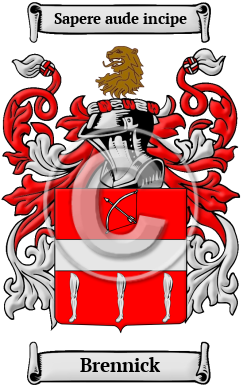 The story of the Brennick family is rich with Scottish history. It begins in the ancient kingdom of Dalriada where Brennick evolved as a name for some who lived in Brennath in Moray, where the name became Birnie. There is also a Birnie in the shire of Elgin. The village of Birnie was originally called Brenuth, from brae-nut, which means "hazel trees". Natives of Birnie, using a local dialect, also called the village Burn-nigh, which means near the burn river. This local name, particularly in medieval times, is prefixed by "de", which means "from." During the Middle Ages, the Birney family became a part of the landed gentry and they wielded considerable prestige and influence in the region of the Scottish borderlands.

Early Origins of the Brennick family

The surname Brennick was first found in Elginshire a former county in northeastern Scotland, in the present day Scottish Council Area of Moray, where Birnie Kirk, a Church of Scotland church built c. 1140 is still found today. It was the first cathedral of the Bishop of Moray. The church is one of the oldest in Scotland to have been in continuous use through the centuries.

Birnie Loch is a man-made loch located in North East Fife from a flooded gravel pit. Birnie Island is a small, uninhabited coral island, 20 hectares in area, part of the Phoenix Island group in central Pacific ocean named after the London firm Alexander Birnie & Co in 1823.

The MacBirnie (MacBurnie and MacBurney) variant was first found in 1466 when David M'Birny was a witness in Kirkcudbright. [1]

Early History of the Brennick family

Historical recordings of the name Brennick include many spelling variations. They include They are the result of repeated translations of the name from Gaelic to English and inconsistencies in spelling rules. Birnie, Birney, Birny, Birnye, Byrnye, Byrny, Berney, Birne, Byrne, McBirny, McBirnie, McBurny, McBurnie and many more.

Another 44 words (3 lines of text) are included under the topic Early Brennick Notables in all our PDF Extended History products and printed products wherever possible.

Migration of the Brennick family to Ireland

Some of the Brennick family moved to Ireland, but this topic is not covered in this excerpt.
Another 66 words (5 lines of text) about their life in Ireland is included in all our PDF Extended History products and printed products wherever possible.

Brennick migration to the United States +

Scottish settlers arrived in many of the communities that became the backbones of the United States and Canada. Many stayed, but some headed west for the endless open country of the prairies. In the American War of Independence, many Scots who remained loyal to England re-settled in Canada as United Empire Loyalists. Scots across North America were able to recover much of their lost heritage in the 20th century as Clan societies and highland games sprang up across North America. Early immigration and passenger lists have documented some of the first Brennicks to arrive on North American shores:

Brennick Settlers in United States in the 20th Century

Motto: Sapere aude incipe
Motto Translation: Dare to be wise, begin at once