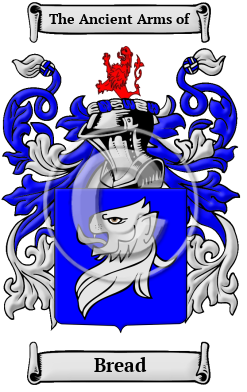 Early Origins of the Bread family

The surname Bread was first found in Cheshire where "in the township of Davenham, [the family] was settled from a remote period the family of La Bret, which terminated in a direct line in Richard Breete of Davenham, early in the 16th century. Hamund la Bret witnessed the grant of Little Mereton to Gralam de Lostock, temp. Henry III.; and Richard le Brette de Daneham occurs among the contributors to the feast on the consecration of Vale Royal Abbey, A.D. 1336." [1]

Early History of the Bread family

Notable amongst the family name during their early history was Sir Henry Braid; and William Brade (1560-1630) an English composer, violinist, and viola player. He moved to northern Germany where he worked for the Brandenburg court, and for King Christian IV in Copenhagen. "He was living at Hamburg on 19...
Another 50 words (4 lines of text) are included under the topic Early Bread Notables in all our PDF Extended History products and printed products wherever possible.

Bread migration to the United States +

Bread Settlers in United States in the 17th Century

Bread Settlers in United States in the 18th Century