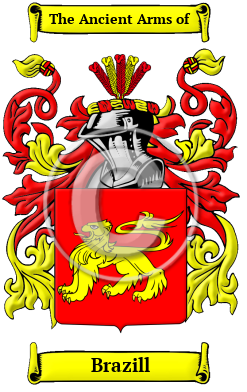 Many variations of the name Brazill have evolved since the time of its initial creation. In Gaelic it appeared as O Breasail, possibly from the word bres, which means strife.

Early Origins of the Brazill family

The surname Brazill was first found in County Armagh (Irish: Ard Mhacha) located in the province of Ulster in present day Northern Ireland, where they held a family seat from ancient times. They were descended from Fiachrach Casan, the progenitor of the Clann Brassil, he was the son of King Colla da Crioch, one of Ireland's greatest kings, who was banished to the Hebrides in 327 A.D. after losing his fight for the High Kingship for all Ireland. Colla da Crioch returned to Ireland in 357.

Early History of the Brazill family

This web page shows only a small excerpt of our Brazill research. Another 176 words (13 lines of text) are included under the topic Early Brazill History in all our PDF Extended History products and printed products wherever possible.

People who were accounted for by scribes and church officials often had their name recorded many different ways because pronunciation was the only guide those scribes and church officials had to go by. This resulted in the problem of one person's name being recorded under several different variations, creating the illusion of more than one person. Among the many spelling variations of the surname Brazill that are preserved in archival documents are Brassil, Brassell, Brassilagh, Breasal, Brazil, Brazell, Braslan and many more.

More information is included under the topic Early Brazill Notables in all our PDF Extended History products and printed products wherever possible.

Brazill Settlers in Australia in the 19th Century