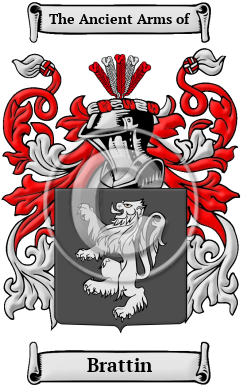 The Brattin history begins in Cornwall, a rugged coastal region in southwestern England. Quite distinct from Devon, the adjoining county, Cornwall had its own spoken language until the late 18th century. The Brattin history began here. The manner in which hereditary surnames arose is interesting. Local surnames were derived from where the original bearer lived, was born, or held land. Unlike most Celtic peoples, who favored patronymic names, the Cornish predominantly used local surnames. The Brattin family originally lived at the villages of Bratton Clovelly and Bratton Fleming in Devon. The name Bratton means the settlement by the brook. [1]

Early Origins of the Brattin family

The surname Brattin was first found in Devon, where the name is associated with two villages, Bratton Clovelly and Bratton Fleming. In the Domesday Book survey of 1086 Bratton Clovelly was recorded as lands held by Baldwin the Sheriff while Bratton Fleming was held by the Count of Mortain and was the site of a swinery and sheep farms. Early in the history of the family name it branched to Dorset, where William de Bratton, also recorded as de Braton, was registered in the Pipe Rolls of 1195. [2]

Some of the family may have originated in the village and civil parish of Bratton, near Westbury in Wiltshire as the Hundredorum Rolls of 1273 list Godfrey de Bratton as holding lands there in 1273. [3]

Bratton Castle (Bratton Camp) is a bivallate Iron Age hillfort on Bratton Down.

One of the most famous and earliest records of the family was Henry de Bretton, Bratton or Bracton (d. 1268), the English ecclesiastic and judge and author of a comprehensive treatise on the law of England. "Three places have been conjecturally assigned as the birthplace of this distinguished jurist, viz. Bratton Clovelly, near Okehampton in Devonshire, Bratton Fleming, near Barnstaple in the same county, and Bratton Court, near Minehead in Somersetshire. The pretensions of Bratton Clovelly seem to rest entirely upon the fact that anciently it was known as Bracton. " [4]

Early History of the Brattin family

This web page shows only a small excerpt of our Brattin research. Another 59 words (4 lines of text) covering the years 179 and 1794 are included under the topic Early Brattin History in all our PDF Extended History products and printed products wherever possible.

Cornish surnames are characterized by a multitude of spelling variations. The frequent changes in surnames are due to the fact that the Old and Middle English languages lacked definite spelling rules. The official court languages, which were Latin and French, were also influential on the spelling of a surname. Since the spelling of surnames was rarely consistent in medieval times, and scribes and church officials recorded names as they sounded rather than adhering to any specific spelling rules, it was common to find the same individual referred to with different spellings of their surname in the ancient chronicles. Moreover, a large number of foreign names were brought into England, which accelerated and accentuated the alterations to the spelling of various surnames. Lastly, spelling variations often resulted from the linguistic differences between the people of Cornwall and the rest of England. The Cornish spoke a unique Brythonic Celtic language which was first recorded in written documents during the 10th century. However, they became increasingly Anglicized, and Cornish became extinct as a spoken language in 1777, although it has been revived by Cornish patriots in the modern era. The name has been spelled Bratton, Braton, Brattone, Bratone, Bratten and many more.

More information is included under the topic Early Brattin Notables in all our PDF Extended History products and printed products wherever possible.

Brattin migration to the United States +

Discovered in the immigration and passenger lists were a number of people bearing the name Brattin:

Brattin Settlers in United States in the 20th Century