The history of the Brameley family goes back to the ancient Anglo-Saxon culture of Britain. It is derived from the family living in Bromley Abbots or Bromley Bagots in Staffordshire. Bromley itself is derived from the Old English word bromleigh which means clearing where brambles are found. Alternatively the name could have originated from the Old English words "brom" + "leah," and meant "woodland clearing where broom grows." [1] However, there are numerous villages and parishes named Bromley throughout Britain. One of the oldest was Bromley in Kent. "This place, which is supposed to have derived its name from the quantity of broom with which the neighbourhood abounds, was in the eighth century given by Ethelbert, King of Kent, to the bishops of Rochester, in whose possession it remained, with very little interruption, till the recent purchase of an estate in Essex for the see." [2]

Early Origins of the Brameley family

The surname Brameley was first found in Staffordshire where one of the first records of the name was Geoffrey de Bromleye who was listed there in the Hundredorum Rolls of 1273. The same rolls list Robert de Bromlegh in Salop. [3] Later the Yorkshire Poll Tax Rolls of 1379 list Johannes de Bromylegh.

"Wootton Hall [in Wooton, Staffordshire], the seat of the Rev. Walter Davenport Bromley, who is owner of the village, is built on a spot than which, in the entire range of the vale of Dove, there is scarcely one more adapted for a noble mansion: its situation is a lofty sloping bank rising from a forest-like seclusion; and the landscape of mountain, meadow, and sylvan scenery is almost unbounded." [2] "The ancient manor of Alvaston [in Cheshire] was possessed by the Bromley family, but no manor now exists." [2]

Early History of the Brameley family

Until quite recently, the English language has lacked a definite system of spelling rules. Consequently, Anglo-Saxon surnames are characterized by a multitude of spelling variations. Changes in Anglo-Saxon names were influenced by the evolution of the English language, as it incorporated elements of French, Latin, and other languages. Although Medieval scribes and church officials recorded names as they sounded, so it is common to find one person referred to by several different spellings of his surname, even the most literate people varied the spelling of their own names. Variations of the name Brameley include Bromley, Bromiley, Bromily, Bromly, Bromely, Bromly, Bromleigh and many more.

Distinguished members of the family include Sir Thomas Bromley (d. 1555?), English judge of an old Staffordshire family, and a second cousin of Sir Thomas Bromley (1530-1587), son of Roger, son of Roger Bromley of Mitley, Shropshire. Sir Thomas Bromley (1530-1587) of Cheshire, was Lord Chancellor of England (1579-1587.) He was descended from an ancient family established since the time of King John at Bromleghe, Staffordshire. [4] John Bromley (c.1652-1707), of White River, St. Philip's, Barbados, and Horseheath Hall, Cambridgeshire, was an English...
Another 81 words (6 lines of text) are included under the topic Early Brameley Notables in all our PDF Extended History products and printed products wherever possible.

Migration of the Brameley family

Searching for a better life, many English families migrated to British colonies. Unfortunately, the majority of them traveled under extremely harsh conditions: overcrowding on the ships caused the majority of the immigrants to arrive diseased, famished, and destitute from the long journey across the ocean. For those families that arrived safely, modest prosperity was attainable, and many went on to make invaluable contributions to the development of the cultures of the new colonies. Research into the origins of individual families in North America revealed records of the immigration of a number of people bearing the name Brameley or a variant listed above: Daniel Bromely settled in Virginia in 1635; John Bromiley arrived in Philadelphia in 1834; William Bromily arrived in Philadelphia in 1855; Alexander Bromley settled in Virginia in 1655. 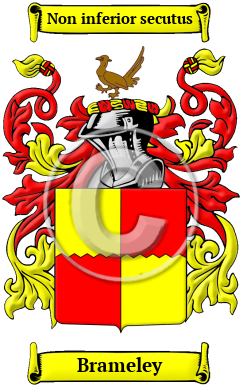