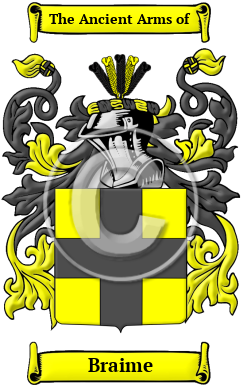 The ancestors of the Braime surname lived among the ancient Anglo-Saxon culture. The name comes from when they lived in any one of a number of similarly named settlements. Bramham and Braham were found in the West Riding of Yorkshire and Brantham was found in Suffolk. Braham Hall was in Essex, as was Bream's Farm.

Early Origins of the Braime family

The surname Braime was first found in the West Riding of Yorkshire, at Braham, a parish, in the Upper division of the wapentake of Barkstone-Ash. "A battle was fought here in 1408, between Sir Thomas Rokeby, sheriff of Yorkshire, and the Earl of Northumberland, in which the earl was defeated and slain, and by which the possession of the county was secured to Henry IV. " [1]

Early History of the Braime family

Before English spelling was standardized a few hundred years ago, spelling variations of names were a common occurrence. Elements of Latin, French and other languages became incorporated into English through the Middle Ages, and name spellings changed even among the literate. The variations of the surname Braime include Braham, Braim, Bramham, Brame, Braem and others.

Notables of this surname at this time include: Johannes de Brame, a prominent 14th century landholder in Yorkshire. Robert Braham (fl. 1555), edited in 1555 'The Auncient Historic and onely trewe and syncere Cronicle of the warres betwixte the Grecians and the Troyans … translated into Englyshe verse by J. Lydgate,' [4] Sir Arnold Braemes (1602-1681), was an English merchant and politician who sat in the House of Commons in 1660; and Richard Brind (died 1718), was an English organist and composer, Organist and Master of the Choristers of St Paul's Cathedral (1707-1718.) John Braham was left an orphan at an early age, and...
Another 121 words (9 lines of text) are included under the topic Early Braime Notables in all our PDF Extended History products and printed products wherever possible.

Migration of the Braime family

A great wave of immigration to the New World was the result of the enormous political and religious disarray that struck England at that time. Families left for the New World in extremely large numbers. The long journey was the end of many immigrants and many more arrived sick and starving. Still, those who made it were rewarded with an opportunity far greater than they had known at home in England. These emigrant families went on to make significant contributions to these emerging colonies in which they settled. Some of the first North American settlers carried this name or one of its variants: Francis Bramham who arrived in Virginia 1756.