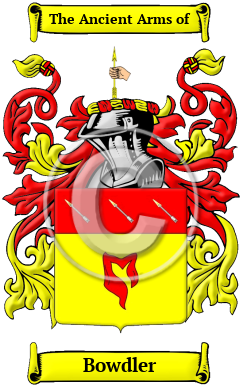 The many generations and branches of the Bowdler family can all place the origins of their surname with the ancient Anglo-Saxon culture. Their name reveals that an early member worked as a worker in iron, or a bowdler. Bowdler was originally derived from the older term, buddler. The word buddle, used in the north of England, meant to cleanse ore, and a vessel made for this purpose shaped like a shallow tumbrel was called a buddle. [1]

Early Origins of the Bowdler family

The surname Bowdler was first found in Shropshire, at Hope-Bowdler, a parish, in the union of Church-Stretton, hundred of Munslow. [2]

The first record of the family was found here in 1273. The Hundredorum Rolls listed Richard le Boudler as holding lands there at that time. [3]

"The Bowdlers, who are now best represented in Shrewsbury and its district, possess a very ancient Shropshire name. Ashford Bowdler is the name of a parish and a seat near Ludlow, the seat being held in the 12th and 13th centuries by the influential family of De Budler or De Bowdler or De Boilers, lords of Montgomery and of many places in Shropshire." [4]

Early History of the Bowdler family

Before the last few hundred years, the English language had no fast system of spelling rules. For that reason, spelling variations are commonly found in early Anglo-Saxon surnames. Over the years, many variations of the name Bowdler were recorded, including Bowdler, Bowdlar, Boudler, Boudlar, Bowdless and many more.

Distinguished members of the family include Thomas Bowdler (1754-1825), English physician, author/editor of the "Family Shakespeare" (1818), and source of the expression: “to bowdlerise.' He also edited Edward Gibbon's "Decline and Fall of the Roman Empire." to make the work more appropriate for women and children. He was descended from a Shropshire family originally settled at Hope Bowdler. His great-grandfather, John Bowdler (1627-1661), held high office in the Irish civil service during the...
Another 72 words (5 lines of text) are included under the topic Early Bowdler Notables in all our PDF Extended History products and printed products wherever possible.

Bowdler migration to the United States +

To escape oppression and starvation at that time, many English families left for the "open frontiers" of the New World with all its perceived opportunities. In droves people migrated to the many British colonies, those in North America in particular, paying high rates for passages in cramped, unsafe ships. Although many of the settlers did not make the long passage alive, those who did see the shores of North America perceived great opportunities before them. Many of the families that came from England went on to make essential contributions to the emerging nations of Canada and the United States. Research into various historical records revealed some of first members of the Bowdler family emigrate to North America:

Bowdler Settlers in United States in the 17th Century

Bowdler Settlers in United States in the 19th Century

Bowdler Settlers in Australia in the 19th Century

Bowdler Settlers in West Indies in the 17th Century