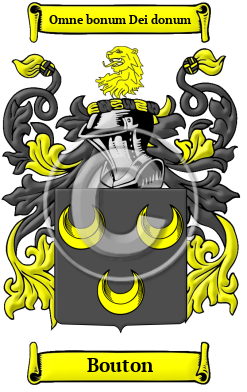 The ancestors of the name Bouton date back to the Anglo-Saxon tribes of Britain. The name is derived from when the Bouton family lived in one of many places called Boughton throughout England. Settlements named Boughton were found in Huntingdonshire, Lincolnshire, Nottinghamshire, and Northamptonshire. Great Boughton is found in Cheshire, and Kent was home to settlements called Boughton Aluph, Boughton Malherbe, Boughton Monchelsea, and Boughton under Blean.

Early Origins of the Bouton family

The surname Bouton was first found in Warwickshire, where this "family of good antiquity, traced to Robert de Boreton, grandfather of William, who lived in the reign of Edward III. " [1]

"Downton Hall [in Downton, Shropshire], the seat of Sir William Rouse Boughton, Bart., to whom the whole property belongs, is a handsome mansion, approached by a beautiful avenue two miles in length, on a gradual ascent, from which the scenery is extensive, romantic, and mountainous, embracing the Titterstone and the Clee hills." [2]

One of the earliest records of the family was Joan Boughton (d. 1494), the English martyr, who "was an old widow of eighty years or more, who held certain of Wycliffe's opinions. She was said to be the mother of a lady named Young, who was suspected of the like doctrines. She was burnt at Smithfield 28 April 1494. " [3]

Early History of the Bouton family

It is only in the last few hundred years that the English language has been standardized. For that reason, early Anglo-Saxon surnames like Bouton are characterized by many spelling variations. As the English language changed and incorporated elements of other European languages, even literate people changed the spelling of their names. The variations of the name Bouton include: Boughton, Bourton, Borton, Boughten, Bourten, Borten, Bouton, Broughton, Portan and many more.

Bouton migration to the United States +

Many English families tired of political and religious strife left Britain for the new colonies in North America. Although the trip itself offered no relief - conditions on the ships were extremely cramped, and many travelers arrived diseased, starving, and destitute - these immigrants believed the opportunities that awaited them were worth the risks. Once in the colonies, many of the families did indeed prosper and, in turn, made significant contributions to the culture and economies of the growing colonies. An inquiry into the early roots of North American families has revealed a number of immigrants bearing the name Bouton or a variant listed above:

Bouton Settlers in United States in the 17th Century

Bouton Settlers in United States in the 18th Century

Bouton Settlers in Canada in the 17th Century